Newhaven is a town in the Lewes District of East Sussex in England. It lies at the mouth of the River Ouse, on the English Channel coast, and is a ferry port for services to France. It was formerly known as Meeching.

Newhaven lies at the mouth of the River Ouse, in the valley the river has cut through the South Downs. Over the centuries the river has migrated between Newhaven and Seaford in response to the growth and decay of a shingle spit (shoal) at its mouth.

There was a Bronze Age fort on what is now Castle Hill.

In about 480 AD, the Saxon people established a village near where Newhaven now stands, which they named "Meeching" (variously known as "Myching" or "Mitching").

Throughout the Middle Ages, the main outlet and port of the Ouse was at Seaford (one of the Cinque Ports).

The growth of the shingle spit hindered the outflow of the river, which consequently flooded the Levels upstream and hindered access to the port. Therefore, a channel through the shingle spit was cut in the mid-16th century below Castle Hill, creating access to a sheltered harbour, better than that at Seaford. This was the origin of modern Newhaven.

However, shingle continued to accumulate and so the mouth of the Ouse began to migrate eastwards again. Under the Ouse Navigation Act (1790), a western breakwater was constructed to arrest longshore drift and so cut off the supply of shingle to the spit. A new outlet (The Cut) was built on the river's present course, below Castle Hill. At that time the settlement began to be known as the "new haven". The present breakwater was built in 1890.

It was part of the Holmstrow hundred until the abolition of hundreds in the 19th century. 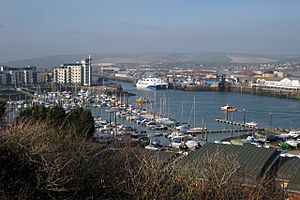 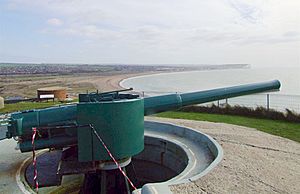 Although there are some signs of the derelict facilities that serviced the former train ferry operations, the port still sees a great deal of freight and passengers movement. International ferries run to the French port of Dieppe, Seine-Maritime, operated by DFDS Seaways. Currently there are two outbound sailings per day, one in the morning and one in the evening, using the 18,654 GT ro-ro ferry MS Côte D'Albâtre. Rail passengers wishing to connect with the ferries are advised nationally to travel to Newhaven Town, and then use the free bus service; this has resulted in a dramatic fall in passenger services at Newhaven Harbour, leading to questions re its future and that of Newhaven Marine.

The port is the proposed main landside site for E.ON's development of the offshore-Rampion Wind Farm.

The village was of little maritime importance until the opening of the railway line to Lewes in 1847. The London Brighton and South Coast Railway (LB&SCR) constructed their own wharf and facilities on the east side of the river, and opened the Newhaven harbour railway station. The railway also funded the dredging of the channel and other improvements to the harbour between 1850 and 1878, to enable it to be used by cross channel ferries, and in 1863 the LB&SCR and the Chemin de Fer de l'Ouest introduced the Newhaven-Dieppe passenger service. The harbour was officially recognised as 'The Port of Newhaven' in 1882. Imports then included French farm products and manufactures, timber, granite and slates.

Newhaven harbour was designated as the principal port for the movement of men and materiel to the European continent during World War I and was taken over by the military authorities and the ferries requisitioned for the duration of the war. Between 22 September 1916 and 2 December 1918, the port and town of Newhaven were designated a 'Special Military Area' under the 'Defence of the Realm Regulations', and the Harbour station was closed to the public. The port and harbour facilities, rail sidings and warehousing were greatly enlarged at this time and electric lighting installed to allow for 24-hour operation.

During World War II, large numbers of Canadian troops were stationed at Newhaven, and the ill-fated Dieppe Raid in 1942 was largely launched from the harbour.

The Newhaven Lifeboat, the first of which was commissioned in 1803, is among the oldest in Britain, and was established some 20 years before the Royal National Lifeboat Institution. The town established the rescue lifeboat in response to the wreck of HMS Brazen in January 1800 when only one man of her crew of some 105 men could be saved. The town used a combination of funds raised locally and contributed by Lloyd's of London to purchase a lifeboat built to Henry Greathead's "Original" design. Newhaven also has one of the Watch stations of the National Coastwatch Institution.

Newhaven Fort, one of the Palmerston Forts, was built on Castle Hill on the recommendation of the 1859 Royal Commission to defend the growing harbour. It was the largest defence work ever built in Sussex and is now open as a museum.

The adjacent village of Tide Mills was the site of an experimental seaplane base at the head of the beach. The first formation of No. 242 Squadron RAF was on 15 August 1918 from numbers 408, 409 and 514 Flights at the seaplane station at New haven, Sussex. Operating from there and the nearby airfield at Telscombe Cliffs, it was equipped with Short Type 184 seaplanes and carried out anti-submarine patrols over the English Channel until the end of the First World War. Surveys carried out in 2006 have exposed part of the slipway, concrete aprons to both hangars with door tracks and several other slabs presumed to be workshops. Sussex Archaeological Society started a dig in April 2006 to catalogue the entire East Beach site.

The main part of the town is located on the west side of the river, there is also a residential area at Denton and Mount Pleasant on the slopes of the Downs to the east. Industrial areas lay on the east side of the river as do all three of the railway stations which serve Newhaven; Newhaven Town, Newhaven Harbour and the now redundant Newhaven Marine. Recent housing development has taken place at the West Quay, Harbour Heights and August Fields.

The main landmark in the town is the Newhaven Fort. The new waste incinerator is a major landmark, the chimney being visible from the sea as well as from Firle Beacon and parts of Seaford.

The parish includes part of the Brighton to Newhaven Cliffs Site of Special Scientific Interest. The cliffs are mainly of geological interest, containing many Santonian and Campanian fossils. The SSSI listing includes flora and fauna biological interest too.

The open land surrounding Newhaven to the west, north and east is part of the South Downs National Park, although the town itself is excluded from the boundaries.

Newhaven lies at the southern end of the cross-country A26 trunk road originating in Maidstone; and its junction with the A259 coast road between Brighton and Eastbourne. It is also located on the Seaford Branch Line from Lewes; there are two operating stations: Newhaven Town and Newhaven Harbour. A third, for all intents and purposes unused since its train ferry services ceased using it, was Newhaven Marine railway station.

Walkers on the long-distance footpath, the Vanguard Way end their journey here from East Croydon in south London.

See also: List of places of worship in Lewes (district)

There are two secondary schools in the town: Seahaven Academy (previously known as Tideway Comprehensive), and UTC@Harbourside which opened in Newhaven in September 2014 for 14- to 18-year-olds. There are four primary schools: Denton Community Primary, Meeching Valley, Harbour Primary School and Newhaven Academy which opened in September 2015 in brand new buildings in Southdown Road, on what was part of the Tideway Comprehensive School site.

The Newhaven Local & Maritime Museum is operated by the Newhaven Historical Society and is a registered charity. The Planet Earth Museum and Sussex History Trail is dedicated to the history of the earth. They are both located at Paradise Park which is a garden centre owned by the Tate family.

The town is featured in Crime Is My Business by W. Howard Baker (Sexton Blake Library No 408, Amalgamated Press, 1958) and possibly based on an idea or material by Jack Trevor Story. Although mentioned (along with Brighton, Beachy Head, and Eastbourne), the references are vague and one would not recognise the town from the book. Other references in the text (a typical Sexton Blake adventure) suggest a roadside café somewhere in the region of the recently demolished Peacehaven Motel, which was formerly situated at the eastern end of Peacehaven.

As might be expected with its proximity to the sea, Newhaven is home to a thriving marina: the Newhaven and Seaford Sailing Club is based there; Scuba diving, water ski-ing and surfboarding are also practised. Newhaven Football Club plays in the Sussex County League; there is a thriving archery club. The town also boasts a large and modern indoor bowls centre, and there is a thriving outdoor bowling green located close to the marina.

All content from Kiddle encyclopedia articles (including the article images and facts) can be freely used under Attribution-ShareAlike license, unless stated otherwise. Cite this article:
Newhaven, East Sussex Facts for Kids. Kiddle Encyclopedia.