Richmond County is a county located on the central southern border of the U.S. state of North Carolina. As of the 2020 Census, the population was 42,946. Its county seat is Rockingham. Richmond County comprises the Rockingham, NC Micropolitan Statistical Area. The Hamlet-Rockingham metropolitan area has a population of 22,579.

The county was formed in 1779 from Anson County. It was named for Charles Lennox, 3rd Duke of Richmond and Lennox who was an Englishman and a member of the Parliament of the United Kingdom who sided with the colonists in America during the American Revolution.

In 1899 the southeastern part of Richmond County became Scotland County.

Kader Keaton, a colonial American officer in the American Revolutionary War, was a founder of Anglo-American settlement in Richmond County.

The city of Hamlet in the southeastern sector of Richmond County is known for its railway history. Prior to the turn of the 20th century, the Seaboard Air Line Railroad moved to Hamlet, helping the town become a crossroads for rail spurs extending from Florida to New York and all points east and west. In 1900, the SAL Railroad constructed the Hamlet Historical Depot Seaboard Air Line Passenger Depot, a Victorian architecture train station which is one of the most photographed train stations in the eastern United States. The depot was added to the National Register of Historic Places in 1971 and was fully restored in 2004. In 2009, the city of Hamlet dedicated a new building to the Tornado steam engine locomotive—the first one in the State of North Carolina. The original locomotive was built in 1839 by D.J. Burr & Associates of Richmond, Virginia. It was briefly captured by Federal forces during the American Civil War before being repatriated. In 1892, the Tornado was featured in the Great Centennial Celebration of Raleigh, NC. Hamlet is also home to the National Railroad Museum and Hall of Fame, a striking collection of artifacts from the Seaboard Air Line Railroad spanning decades of time.

Richmond County is well known for its history in racing, with the advent of the Rockingham Speedway which opened in 1965. Until 2005, this one-mile race track featured bi-annual NASCAR-sanctioned events in the Sprint Cup and Nationwide Series divisions. Presently, the race track hosts several other events hosted by sanctioning bodies including ARCA, USAR Pro Cup, and UARA Late Models. Rockingham also includes a weekly scheduled series of events for Bandolero and Legends race car classes at the 1/2 mile infield track dubbed the "Little Rock". Richmond County also hosts lawnmower races. Each weekend from April–October, the Lion's Club of Ellerbe puts on a weekly show, attracting fans and competitors from surrounding counties and states.

The County is also host to Rockingham Dragway, an International Hot Rod Association-sanctioned drag strip, which hosts over 90 drag racing events per year.

Richmond County also has notable options for both fishing and hunting. Richmond County is home to the Sandhills Game Lands and the Pee Dee Wildlife Refuge, where activities such as hiking, biking, horseback riding, boating, and hunting are available to the public. Popular hunting game include deer, turkey, quail, and fox squirrels. Blewett Falls Reservoir is the largest lake in the county, offering fishing opportunities for Big Blue and Flathead Catfish as well as Striped Bass and Shad. Rockingham is working on developing a 10-mile "Blue Trail" for paddling and canoeing along Hitchcock Creek and a four-mile stretch of the Pee Dee River, with camping allowed at the final portage point - Diggs Tract. 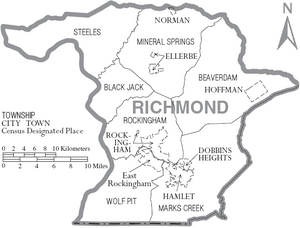 All content from Kiddle encyclopedia articles (including the article images and facts) can be freely used under Attribution-ShareAlike license, unless stated otherwise. Cite this article:
Richmond County, North Carolina Facts for Kids. Kiddle Encyclopedia.