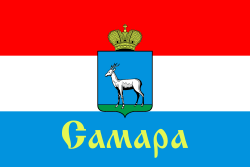 The coat of arms

Samara (Russian: Самара) is the ninth largest city in Russia. It is the administrative center of Samara Oblast. About 1,164,685 people live in the city.

It is in the southeastern part of European Russia at the confluence of the Volga and Samara Rivers. It is on the east bank of the Volga. Samara is the economic and cultural center in European Russian. They hosted the European Union–Russia summit in May 2007.

All content from Kiddle encyclopedia articles (including the article images and facts) can be freely used under Attribution-ShareAlike license, unless stated otherwise. Cite this article:
Samara, Russia Facts for Kids. Kiddle Encyclopedia.