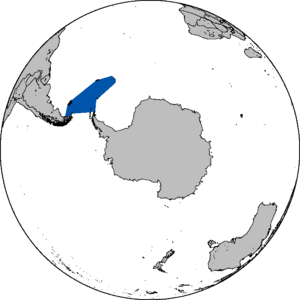 Approximate area of the sea in the Southern Hemisphere 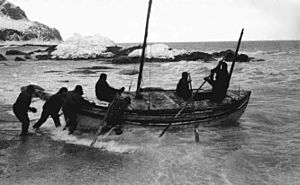 Launching the James Caird from the shore of Elephant Island, 24 April 1916 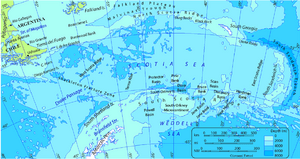 Normally stormy and cold, the Scotia Sea is the area of water between Tierra del Fuego, South Georgia, South Sandwich Islands, South Orkney Islands and the Antarctic Peninsula. It is bordered on the west by Drake Passage. These island groups all sit on top of the Scotia Ridge. The Scotia Sea covers an area of about 900,000 km². About half of the sea stands above the continental shelf.

The islands are rocky and partly covered in ice and snow year round.

The islands do have vegetation. They have been called Scotia Sea Islands tundra ecoregion. These include South Georgia, the volcanic South Sandwich Islands and the South Orkneys in the Scotia Sea as well as the remote South Shetland Islands near the Antarctic Peninsula and the small isolated volcano Bouvet Island. All these islands are in the cold seas below the Antarctic convergence. These areas have tundra vegetation of mosses, lichen and algae. Seabirds, penguins and seals feed in the surrounding waters.

All content from Kiddle encyclopedia articles (including the article images and facts) can be freely used under Attribution-ShareAlike license, unless stated otherwise. Cite this article:
Scotia Sea Facts for Kids. Kiddle Encyclopedia.