Tesla Motors is a company based in Palo Alto, California which makes electric cars. It was started in 2003 by Martin Eberhard and Elon Musk (who also co-founded PayPal and is the CEO of SpaceX). Eberhard no longer works there. Today, Elon Musk is the Chief Executive Officer (CEO). It started selling its first car, the Roadster in 2008.

Some car companies that were trying to start making electric cars in the early 2000's tried to make a car that wouldn't cost very much, so that many people would buy it. But it is hard to for a new company to make many cars for a low price right in the beginning. So Tesla Motors had a different idea. They would make a very expensive, very good electric car, and sell each one for a lot of money. Then after they had made some money, they would start making cars that weren't as expensive, and eventually they would make cheap electric cars that most people could buy. They also had an unusual idea to make only one kind of car at a time. So when they started making the less expensive car (Model S) they stopped making the Roadster. So far their ideas have been working, and they are one of the very few start-up companies that have been able to make electric cars and stay in business.

The Tesla name originally comes from Nikola Tesla. He was an inventor who worked with electricity, electric cars and many other ideas along with Thomas Edison a century earlier. 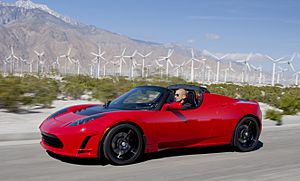 There were some test cars built from 2004 to 2007, but regular production started in 2008. From then until the end of 2011, they sold 2,150 Tesla Roadsters to customers in 31 countries. It sold for about $100,000 dollars, but it was very fast (0 to 60 mph in 3.9 seconds) and could go a long way before the batteries needed to be recharged. One big problem of electric cars compared to cars that run on gasoline, is that most electric cars could not go very far before needing to be recharged. A gasoline car can often go 300 or 400 miles before needing more gas, but most electric cars could not go over 100 miles on a charge (EV-1, RAV4-EV, etc.). The Roadster could go 220 miles on a single charge.

The Model S replaces the Roadster. It is sold with different battery sizes - for $58,750 it can go 160 miles. The top end can go 265 miles on a charge and with all the extras can cost $100,000. The 2013 Model S was named the MotorTrend Car of the Year, the 2013 Car of the Year by Automobile Magazine and the 2013 World Green Car at the New York International Auto Show. It has a 0.24 coefficient of drag, which is more aerodynamic than a Toyota Prius, so it uses less energy to push the air out of the way as it moves.

The Tesla Model X is an SUV that has been delayed, but is scheduled to come out in 2015.

All content from Kiddle encyclopedia articles (including the article images and facts) can be freely used under Attribution-ShareAlike license, unless stated otherwise. Cite this article:
Tesla Motors Facts for Kids. Kiddle Encyclopedia.