Wellington is a small industrial town in rural Somerset, England, situated 7 miles (11 km) south west of Taunton in the Taunton Deane district, near the border with Devon, which runs along the Blackdown Hills to the south of the town. The town has a population of 14,549, which includes the residents of the parish of Wellington Without, and the villages of Tone and Tonedale.

Known as Weolingtun in the Anglo-Saxon period, its name had changed to Walintone by the time of the Domesday Book of 1086. Wellington became a town under a royal charter of 1215 and during the Middle Ages it grew as a centre for trade on the road from Bristol to Exeter. Major rebuilding took place following a fire in the town in 1731, after which it became a centre for cloth-making. Wellington gave its name to the first Duke of Wellington, Arthur Wellesley, who is commemorated by the nearby Wellington Monument. The Grand Western Canal reached the town in 1835 and then the Bristol and Exeter Railway in 1843. The town's own railway station survived until 1964. Wellington was home of Fox, Fowler and Company, which was the last commercial bank permitted to print their own sterling banknotes in England and Wales. In the 20th century closer links with Taunton meant that many of the residents of Wellington commuted there for work, and the M5 motorway enabled car journeys to be made more easily.

Local industries, which now include an aerosol factory and bed manufacturers, are celebrated at the Wellington Museum in Fore street. Wellington is home to the independent Wellington School, and state-funded Court Fields School. It is also home to a range of cultural, sporting and religious sites including the 15th century Church of St John the Baptist. The capital city of New Zealand is named after Arthur Wellesley, 1st Duke of Wellington, thus his title comes from the town of Wellington, Somerset, England.

In a grant of between 899 and 909, Edward the Elder, gave the land then known as Weolingtun, which means "wealthy estate", along with West Buckland and Bishops Lydeard to Bishop Asser. This was in exchange for the monastery of Plympton in Devon. An alternative explanation for the origin of the name is “the settlement in the temple clearing”. By the time of the Domesday Book of 1086, the name had changed to Walintone, and the estate was owned by Gisa (Bishop of Wells). The parish of Wellington was part of the Kilmersdon Hundred,

A site at Longforth Farm near Tonedale has been identified as having Bronze Age occupation and, during excavations prior to the building of new homes, found to have been occupied by a 12th-14th century building with decorated floor tiles covering 0.4 hectares (0.99 acres).

A royal charter of 1215 gave Wellington its status as a town, and during the medieval period it grew as a centre for trade on the road from Bristol to Exeter, being laid out, with the church at the east end of town, in a similar manner to other towns of this era. In 1548, the manor was sold to Edward Seymour, 1st Duke of Somerset, but reverted to the control of the bishops after his execution. By the end of the 16th century it had come under the protection of John Popham (judge) and his descendants who built a manor house which was destroyed during the English Civil War.

Major rebuilding took place in the town following a fire in 1731. After this the town's importance grew as it became a centre for clothmaking across Somerset and Devon, its importance as trade centre enhanced by fires in Taunton and Tiverton. By the 1831 census, 258 people were recorded as cloth workers in Wellington.

Wellington gave its name to the first Duke of Wellington, Arthur Wellesley. Nearby Wellington Hill boasts a large, spotlit obelisk to his honour, the Wellington Monument. The Wellington Monument is a floodlit 175 feet (53 m) high triangular tower designated by English Heritage as a grade II* listed building. It was erected to celebrate the Duke of Wellington's victory at the Battle of Waterloo. The foundation stone was laid in 1817, on land belonging to the Duke, but the monument was not completed until 1854. It is now owned by the National Trust, who announced plans to reclad the monument at a cost of £4 million in 2009. 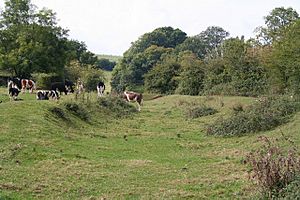 Site of the Grand Western Canal

In the 18th century turnpikes arrived in the area and then in the 19th communications improved with the building of the Grand Western Canal, which reached the town in 1835, and then the Bristol and Exeter Railway. Wellington station was opened when the line reached the town on 1 May 1843. It was a typical Brunel design but was rebuilt in 1932 when two loop lines were put in. This entailed the platforms being moved back to accommodate the widened lines. These platforms are clearly visible and a goods shed still stands on the east side of the line at the Taunton end of the station, although the station closed on 5 October 1964. Wellington was an important station as it stood at the foot of a steep incline. Banking locomotives were kept here, ready to assist heavy westbound trains up to Whiteball Tunnel.

In the 20th century closer links with Taunton meant that many of the residents of Wellington commuted there for work, and the M5 motorway, which opened in sections in the 1960s and 1970s, enabled car journeys to be made more easily.

Thomas Fox started the Fox, Fowler and Company bank in Wellington which rapidly expanded and ran successfully, until it merged with Lloyds Bank in 1927. It was the last private bank in England to issue its own notes and they were legal tender until 1964. There are nine notes left in circulation. The British Museum have another example on display. The bank established its Head Office at the old family house in Fore Street, Wellington (today the Lloyds Bank branch) - they opened branches at Taunton, Bridgwater, Weston-super-Mare, Torrington, Bideford, Barnstaple, Ilfracombe and South Molton. 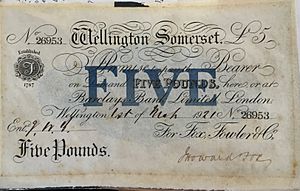 The original £5 Note is on display at Tone Dale House - one of the last nine and possible the only one left uncancelled.

The town has many dependent villages including West Buckland, Langford Budville, Nynehead, Sampford Arundel and Sampford Moor. The formerly independent village of Rockwell Green, to the west of the town, has been incorporated into the town however there is still a green wedge of land in between them. Wellington Park was a gift from the Quaker Fox family to the town in 1903 as a memorial to the coronation of King Edward VII. The 4.9 acres (2.0 ha) gardens were laid out by F.W. Meyer, who included a rock garden which used 80 tons of limestone from Westleigh quarry near Burlescombe. It is Grade II listed on the English Heritage Register of Parks and Gardens of Special Historic Interest in England. It was restored at a cost of £412,827 which included a grant of £296,500 from the Heritage Lottery Fund Public Parks Initiative.

There are Local Nature Reserves at Wellington Basins on the western fringe of the town. It includes a small pond and boardwalk with a variety of wildlife habitats. The grassland, hedges and woodland are home to a varied flora and fauna including birds such as the grey wagtail, dipper and reed bunting. Five separate bat species have been recorded at the site. Swains Pond in the south of Wellington is another Local Nature Reserve, which used to be the site of orchards. It now includes a pond which provides a home for amphibians including the great crested newt, palmate newt and toads.

Along with the rest of South West England, Wellington has a temperate climate which is generally wetter and milder than the rest of the country. The annual mean temperature is approximately 10 °C (50.0 °F). Seasonal temperature variation is less extreme than most of the United Kingdom because of the adjacent sea temperatures. The summer months of July and August are the warmest with mean daily maxima of approximately 21 °C (69.8 °F). In winter mean minimum temperatures of 1 °C (33.8 °F) or 2 °C (35.6 °F) are common. In the summer the Azores high pressure affects the south-west of England, however convective cloud sometimes forms inland, reducing the number of hours of sunshine. Annual sunshine rates are slightly less than the regional average of 1,600 hours. In December 1998 there were 20 days without sun recorded at Yeovilton. Most the rainfall in the south-west is caused by Atlantic depressions or by convection. Most of the rainfall in autumn and winter is caused by the Atlantic depressions, which is when they are most active. In summer, a large proportion of the rainfall is caused by sun heating the ground leading to convection and to showers and thunderstorms. Average rainfall is around 700 mm (28 in). About 8–15 days of snowfall is typical. November to March have the highest mean wind speeds, and June to August have the lightest winds. The predominant wind direction is from the south-west.

The town has a population of 13,696. Large growth occurred during the 1970s when housing developments were built on the south side of the town. These were largely prompted by Wellington's proximity to Junction 26 of the M5 motorway. 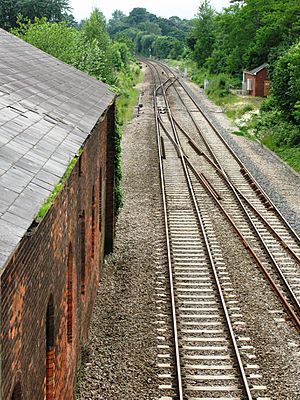 The goods shed and railway station site at Wellington

The town was served by Wellington railway station on the Bristol and Exeter Railway from 1 May 1843 until 5 October 1964. It was here that extra locomotives were attached to heavy trains to help them up the incline to Whiteball Tunnel on their way south. The railway from Penzance to London, and also to Bristol and the North, continue to pass through the town, but no trains stop. The nearest railway stations are Taunton and Tiverton Parkway. A campaign was started to reopen the railway station in 2009.

The town is close to junction 26 of the M5 motorway, which spent a year in the 1970s as a temporary terminal junction, whilst the motorway between junctions 26 and 27 was finished. The A38 is also still a very important link to Taunton. 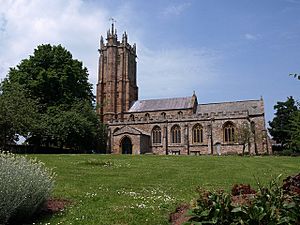 Despite its small size, Wellington has historically been notable for its profusion of churches of many different denominations, including a Quaker meeting house, the Grade I listed, 15th century Church of St John the Baptist, which includes a monument to John Popham, and the Roman Catholic Church of St John Fisher which was built in 1606 as Popham's Almshouses and converted into a Roman Catholic church 1936. Also there was a Presbyterian Independent Church. 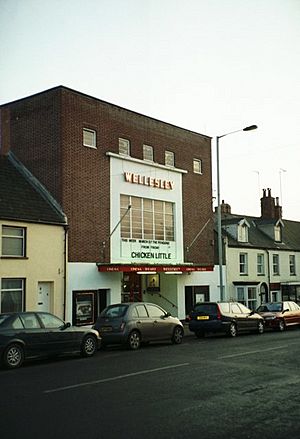 Wellington has its own amateur dramatic group, formed in the 1960s, called Wellington Arts Association, which holds productions both at Wellington Arts Centre and at the Wellesley Theatre. It includes the Genesis Youth Theatre Group, Operatic Society, Pantomime Group, Civic Players, Arcadians and the Spectrum Arts And Crafts. The Wellesley Cinema was built in 1937, in the traditional Art Deco style of that period. The auditorium seats 400 people on two levels and is run as an independent cinema.

The town also has its own weekly newspaper, the Wellington Weekly News, which was first published in 1860. There is also a community website providing news and views about the town, Around Wellington. Wellington is twinned to the town of Immenstadt in Germany, the town of Lillebonne in France and Torres Vedras in Portugal.

The town is home to Wellington Silver Band, a fourth section brass band. The band can trace its origins to 1887, when it was formed from the volunteer band of the 2nd Battalion, Prince Albert's Somersetshire Light Infantry.

All content from Kiddle encyclopedia articles (including the article images and facts) can be freely used under Attribution-ShareAlike license, unless stated otherwise. Cite this article:
Wellington, Somerset Facts for Kids. Kiddle Encyclopedia.