The Ñuble Province (Spanish: Provincia de Ñuble) was one of the provinces of the Chilean region of Bío Bío (VIII). The provincial capital was the city of Chillán.

The province was created in 1974, as the historical province of Ñuble was supressed by the military dictatorship of Augusto Pinochet. In 2018 the province was converted in the Ñuble Region.

Ñuble is bordered to the north by the Maule region (Cauquenes and Linares provinces), to the east by Argentina, to the south by the Bío Bío province and to the west by the Concepción province and the Pacific Ocean.

As a province, Ñuble was a second-level administrative division, consisting of 21 communes (comunas). The city of Chillán served as the provincial capital. The province was administered by a governor. 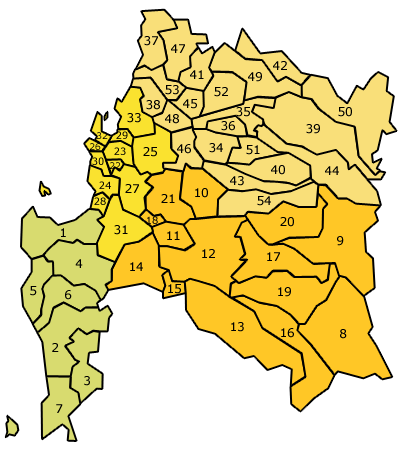 All content from Kiddle encyclopedia articles (including the article images and facts) can be freely used under Attribution-ShareAlike license, unless stated otherwise. Cite this article:
Ñuble Province (1974-2018) Facts for Kids. Kiddle Encyclopedia.