The 1910 Cuba hurricane was said to be one of the worst tropical cyclones that has ever hit Cuba. The storm formed in the southern Caribbean Sea on October 9, 1910. It grew stronger as it moved northwest. It then made landfall on the western end of Cuba. The storm made a loop over open water, and then began moving towards the United States. After crossing Florida, the storm moved near the rest of the southeastern United States and passed out to sea.

Because of the storm's loop, some reports said it was actually two hurricanes. In Cuba, the storm was one of the worst disasters in the island's history. There was bad damage and thousands of people lost their homes. In Florida, the storm also caused damage and caused flooding in some areas. It is not known exactly how much damage the storm caused. However, losses in Havana, Cuba were over $1 million. At least 100 people died in Cuba alone. 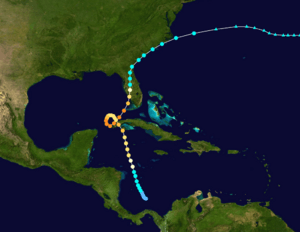 On October 9, a type of storm called a tropical depression began in the southern Caribbean Sea. It was north of Panama. The storm grew stronger while it moved toward the northwest. It became a tropical storm on October 11. On October 12, it became a hurricane. The next day, the storm was seen to the southwest of Cuba. For a short time, it was a Category 3 hurricane measured on the Saffir-Simpson Hurricane Scale. The storm then hit western Cuba and crossed the island. It moved over the Gulf of Mexico and slowed down.

The storm was unusual because it was first thought to be two different hurricanes. This is because of the loop it made in the Gulf of Mexico. One paper reported that the first hurricane died in the central Gulf of Mexico; the second hurricane formed and hit Florida. The storm's path was debated, and it was later found to be a single cyclone.

On October 15, all ships in a 500 miles (800 km) area around Key West were warned of the storm. Many ships stayed in harbors. Storm warnings were also put up. 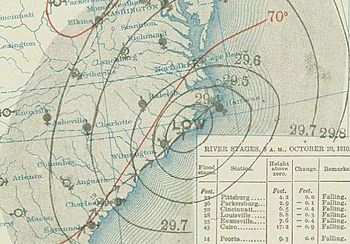 Weather map of the storm on October 20

The storm caused bad damage in Cuba. It was considered one of the worst tropical cyclones on the island. Strong winds and a lot of rain caused flooding in streets, ruined crops (mostly tobacco), and damaged farms. The hurricane affected many towns, including Casilda. The town of Batabanó was left under water. The hurricane halted communication to other areas. Most of the deaths and damages were reported to be in the Pinar del Río Province.

The New York Times wrote that Cuba had "probably suffered the greatest material disaster in all its history". Thousands of peasants, or workers, lost their homes. The country's capital, Havana, also suffered bad damage. On the coast, many ships carrying valuable items sunk. The storm also badly damaged goods kept on wharves. Tall waves crashed on land and caused flooding. Many boats were wrecked by the storm. The high waves flooded about 1 square mile (2.6 km2) of Havana's coastal land.

At least 100 people were killed by the storm, mostly because of mudslides, including five people in Havana. However, some reports say the death toll was as high as 700. Damage caused by the storm cost millions of dollars. In Havana alone, $1 million in losses were reported.

A ship, the Holliswood, became stuck in the storm in the Gulf of Mexico. It left New Orleans on October 1 and was carrying cypress wood. The ship's crew fought the storm for days. The Holliswood was blown miles off its path. Its owner, Paul Mangold, said:

On Wednesday, the 12th, we began to get the first of the hurricane. [...] Early Saturday morning we got the full force of the storm. [...] The wind circled about us sometimes at a hundred-mile rate. The seas came from all directions, though it was from the starboard [right side] that the real trouble seemed to come.

A steamboat called the Harold saw the ship and rescued all of the crew. However, Captain E. E. Walls said he wanted to stay behind. The Holliswood was badly damaged. The crew told the captain that the ship would be unable to float in five more hours. After the crew was rescued, Captain Walls struggled for days without food or fresh water. On October 20, another ship (the Parkwood) rescued Walls. He was unconscious, and thought to be dead. When he was on the Parkwood, he woke up, but was delirious. He asked to be put back on the Holliswood. Instead, the Parkwood pulled the damaged ship to land.

At Key West, Florida, winds blew at 110 miles per hour (180 km/h). Many docks were destroyed. Damage in the Florida Keys was worth around $250,000 (1910 USD, or $5.7 million in 2009 dollars), and houses near the ocean were damaged. Strong winds pushed water out of the Tampa Bay. High waves from the sea moved over land, and people had to hold onto trees to survive. Some citrus crops were destroyed. The wind tore the roofs off homes and shook buildings off their foundations.

Seven men died at Punta Gorda when some Cuban ships were wrecked. Near there, one man and a baby drowned, and another died trying to cross a flooded river. A French steamship, the Louisiane, crashed into land. There were 600 passengers on the ship. All people were rescued by another ship.

The hurricane blew down many pine trees near Jupiter, Florida. One man near Lemon City was killed by falling wood. However, the storm's effects on the east coast of Florida were not as bad as they were in other places. Part of the Florida East Coast Railroad was washed out. The storm blew an American ship aground at Boca Raton. Three people died, and the rest of the crew was stuck for 12 hours.

All content from Kiddle encyclopedia articles (including the article images and facts) can be freely used under Attribution-ShareAlike license, unless stated otherwise. Cite this article:
1910 Cuba hurricane Facts for Kids. Kiddle Encyclopedia.