The winner of this tournament qualified for the 2017 FIFA Confederations Cup tournament in Russia. 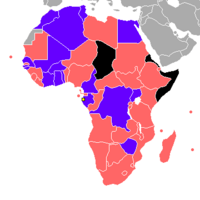 The draw for the qualification stage took place on 8 April 2015. The following teams have qualified for the final tournament.

The draw took place on the 19th of October 2016 in Libreville.

All content from Kiddle encyclopedia articles (including the article images and facts) can be freely used under Attribution-ShareAlike license, unless stated otherwise. Cite this article:
2017 Africa Cup of Nations Facts for Kids. Kiddle Encyclopedia.