Bill & Ted's Excellent Adventures is a 1990 animated television series spinoff from the 1989 film of the same title, following the misadventures of two time-travelling slackers as they travel into the distant past and future.

As in the movie, the show features two dim-witted teenage musicians, Bill and Ted, who are visited by Rufus, a man from the future, who needs them to graduate from high school in order to start a rock band that inspires the people of the future. They travel to various time periods, making sure that history happens as it should, more or less.

The first season of the animated series was produced by Hanna-Barbera and aired on CBS in 1990, with Keanu Reeves, Alex Winter, George Carlin, and Bernie Casey reprising their film roles.

For the second season in 1991, the animated series switched production companies and networks, now airing on Fox Kids, and produced by DIC Animation City. As Fox was also planning on airing a new live-action version series with the same name, the cast was replaced, and the leads were now voiced by Evan Richards and Christopher Kennedy, the actors who would go on to portray Bill and Ted on the short-lived 1992 live-action television series. The new episodes introduced a "Squint" phone booth that could take Bill and Ted into literature, television shows, and (after shrinking them) inside the human body. The new show had trouble catching on, and after one more season, the animated Bill & Ted series was cancelled. 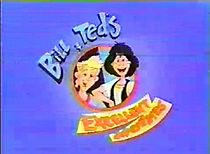