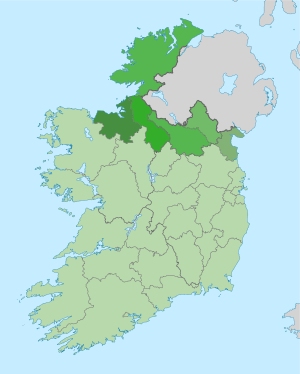 The Border region of Ireland with each constituent county council highlighted.

The Border Region is a NUTS Level III statistical region of Ireland. It comprises the territory of counties Cavan, Donegal, Leitrim, Louth, Monaghan and Sligo. The Border Region spans 12,156 km2, 17.3% of the total area of the state and has a population in excess of 432,500. Its NUTS code is IE011.

The region's largest town is Drogheda which also has extensive links with the Mid-East Region.

The region stretches from the Atlantic Ocean in the west to the Irish Sea in the east. Two of Ireland's longest rivers, the Shannon and the Erne have their source here and have been connected to form one of the world's longest waterways - the Shannon–Erne Waterway. The region has a large rural landscape with many distinctive geographical features. There are many large mountain ranges and high sea cliffs in Donegal, such as Derryveagh Mountains and Slieve League. The region contains two of Ireland's three fjords: Lough Swilly in County Donegal and Carlingford Lough in County Louth.

The Border region was administered by the Border Regional Authority, which consisted of 38 elected representatives including the region's representative on the EU Committee of the Regions. These representatives met once a month and were nominated from the six local government councils of the region:

A list of the ten largest settlements in the Border region. County capitals are included and are shown in bold.

All content from Kiddle encyclopedia articles (including the article images and facts) can be freely used under Attribution-ShareAlike license, unless stated otherwise. Cite this article:
Border Region Facts for Kids. Kiddle Encyclopedia.