Brentwood is an affluent neighborhood in the Westside of Los Angeles, California. It is the home of seven private and two public schools.

Originally part of a Mexican land grant, the neighborhood began its modern development in the 1880s and hosted part of the pentathlon in the 1932 Summer Olympics. Brentwood is also home to many celebrities such as actors and actresses.

Brentwood was part of the Rancho San Vicente y Santa Monica, a Mexican land-grant ranch sold off in pieces by the Sepúlveda family after the Mexican-American War.

Modern development began after the establishment of the 600-acre (2.4 km2) Pacific Branch of the National Home for Disabled Soldiers and Sailors in the 1880s. A small community sprang up outside that facility's west gate, taking on the name Westgate. Annexed by the City of Los Angeles on June 14, 1916, Westgate's 49 square miles (130 km2) included large parts of what is now the Pacific Palisades and a small portion of today's Bel-Air. Westgate Avenue is one of the last reminders of that namesake.

The Sunset Fields Golf Club, known as the Brentwood Country Club since 1941, hosted the running part of the modern pentathlon event in the 1932 Summer Olympics.

The preceding statement is incorrect and caused by a confusion of Olympic events & locations. Brentwood Country Club was known as Brentwood Country Club at the time of the 1932 Los Angeles Olympics. It appears as Brentwood Country Club at 590 Burlingame Avenue in the Los Angeles City Directory for 1933, which would have been compiled in 1932. A 1927 Los Angeles Times article describes the beginning of construction on Sunset Fields Golf Course near Crenshaw Boulevard between Vernon Avenue and Santa Barbara Avenue (now Martin Luther King Jr. Boulevard). The book, Leimert Park, states, "The Sunset Fields Golf Course in Leimert Park was also the location of another official Olympic venue, the running portion of the modern pentathlon .... The close proximity of the Olympic games to the neighboring community of Leimert Park brought much attention to the development." The Xth Olympiad: Los Angeles, 1932 - Official Report says, "The Cross Country Run of the Modern Pentathlon was held at 9:00 A.M. on the course of Sunset Fields Golf Club of Los Angeles. The distance was 4000 metres, slightly less than two-thirds of which was laid on the fairways of the golf course, and over and through several of the natural washes and gullies to be found on the course. The remainder involved the climbing of a very steep hill, to the level of the Olympic Village, thence down a narrow draw by a winding path and across a wide ditch to the Golf Club property again. The start and finish were a short distance in front of the clubhouse." A map of the various Olympic venues and locations in the same report shows the Olympic Village as being located southwest of the intersection of Vernon Avenue and Crenshaw Boulevard, which lies exactly where Sunset Fields Golf Course was (an area now occupied by the Baldwin Hills Crenshaw Plaza).

The confusion may have arisen because part of the route of the Equestrian Cross Country portion of Modern Pentathlon may have crossed Brentwood Country Club. This event used the route of Phase D of the Cross Country portion of the Equestrian Three-Day Event competition. Riviera Country Club in Bel-Air, east of Brentwood, served as the headquarters of all Olympic Equestrian Events, A map in the Official Report shows the equestrian course briefly following Burlingame Avenue in Brentwood. As in 1932, the address of Brentwood Country Club of Los Angeles is still 590 South Burlingame Avenue. 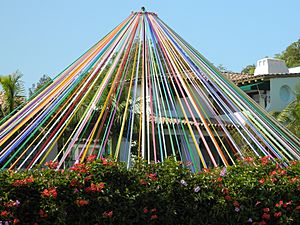 Local traditions include the annual decoration of San Vicente Boulevard's coral trees with holiday lights and a Maypole erected each year on the lawn of the Archer School for Girls, carrying on that set by the Eastern Star Home previously housed there. This building was the exterior establishing shot for the "Mar Vista Rest Home" that provided a key scene in the 1974 film Chinatown.

On November 6, 1961, a construction crew working in Sherman Oaks in the San Fernando Valley north of Brentwood on the far side of the Santa Monica Mountains noticed smoke and flames in a nearby pile of rubbish. Within minutes, Santa Ana winds gusting up to 60 mph (100 km/h) sent burning brush aloft and over the ridge into Brentwood.

More than 300 police officers helped evacuate 3,500 residents during the 12-hour fire, and some 2,500 firefighters battled the blaze, pumping water from neighborhood swimming pools to douse flames. Pockets of the fire smoldered for several days. Even as firefighters battled what was to become a Bel Air disaster, another fire erupted in Santa Ynez Canyon to the west. That blaze was contained the next day after consuming nearly 10,000 acres (40 km2) and nine structures and burning to within a mile of Bel Air and Brentwood.

The fires were the fifth-worst conflagration in the nation's history at the time, burning 16,090 acres (65 km2), destroying more than 484 homes and 190 other structures and causing an estimated $30 million in damage.

The district is located at the base of the Santa Monica Mountains, bounded by the San Diego Freeway on the east, Wilshire Boulevard on the south, the Santa Monica city limits on the southwest, the border of Topanga State Park on the west and Mulholland Drive along the ridgeline of the mountains on the north.

As a member of a group of nearby neighborhoods that are affluent, it is known as one of the "Three Bs", along with Beverly Hills and Bel Air. 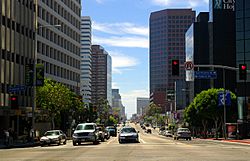 A view of Wilshire Boulevard westbound, toward the ocean. Brentwood begins on the right-hand side of the street.

Brentwood, like nearby Santa Monica, has a temperate climate influenced by marine breezes off the Pacific Ocean. Residents frequently wake to a "marine layer," a cover of clouds brought in at night which burns off by mid-morning. The topography is generally split into two characters, broadly divided by Sunset Boulevard: the area north of Sunset is defined by ridges and canyons of the Santa Monica Mountains; south of Sunset the area is hilly. The southern district features underground springs which bubble up into a small creek along "the Gully" near the Brentwood Country Club, and in the "Indian Springs" portion of the University High School campus, formerly the site of a Native American Tongva village.

The 2000 U.S. census counted 31,344 residents in the 15.22-square-mile Brentwood neighborhood—or 2,059 people per square mile, among the lowest population densities for the city and the county. In 2008, the city estimated that the population had increased to 33,312. In 2000 the median age for residents was 35, which was old for city and county neighborhoods. The percentages of residents aged 50 and older were among the county's highest.

The median yearly household income in 2008 dollars was $112,927, considered high for the city and the county. Renters occupied 48.4% of the housing stock, and house- or apartment-owners held 51.6%. The average household size of two people was considered low for Los Angeles. The 5.7% of families headed by single parents was low for city and county neighborhoods. 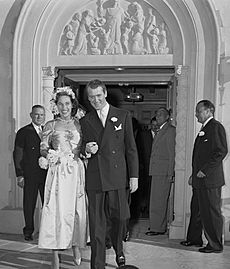 The Brentwood Presbyterian Church was the site of the wedding of actor James Stewart and Gloria H. McLean in 1949.
Los Angeles Times 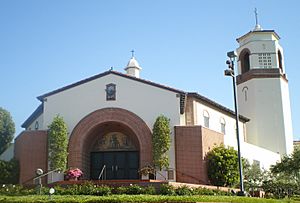 San Vicente Boulevard is divided by a wide median on which stand many large coral trees. This green belt replaced a Pacific Electric trolley track, and the trees have been named a City of Los Angeles Historic-Cultural Monument. 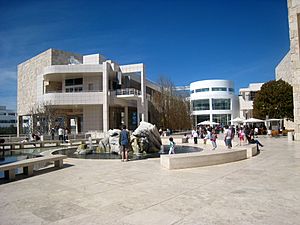 The Getty Center opened on the heights of Brentwood in 1997

Brent-Air Pharmacy, run by the founding Lassoff family from its inception until June 2007, has served Brentwood for more than 50 years. The drug store has been the scene of many famous scandals and, like its defunct West Hollywood cousin Schwab's, is known as the pharmacy to the stars, where many now-notable actors and actresses worked as delivery boys or "candy counter" girls.

The Brentwood Country Mart, near the corner of San Vicente Blvd and 26th Street next to the Santa Monica city limit, is a shopping and food center that first opened in 1948.

Vicente Foods is an independently owned and operated grocery market that has served Brentwood since 1948. Other local markets include Whole Foods and Ralphs.

A popular area for dining and coffee for local residents is located in Brentwood Village at the intersection of Barrington and Sunset. More than a dozen restaurants and coffee shops are located within a two-block stretch offering a wide variety of cuisine.

Dutton's Brentwood Books, a local landmark called by Sunset magazine "the last of the truly independent bookstores," closed its doors in April, 2008.

All content from Kiddle encyclopedia articles (including the article images and facts) can be freely used under Attribution-ShareAlike license, unless stated otherwise. Cite this article:
Brentwood, Los Angeles Facts for Kids. Kiddle Encyclopedia.