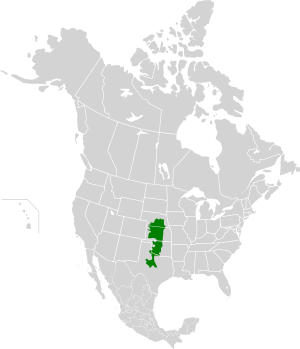 It is designated as the Central and Southern Mixed Grasslands ecoregion by the World Wildlife Fund.

This large grassland area with very few trees runs north–south from central Nebraska through central Kansas and western Oklahoma to north-central Texas, covering 282,000 km2 (109,000 sq mi). It is a transition zone between the Central tall grasslands and Central forest-grasslands transition ecoregions to the east and the Western short grasslands to the west, while to the north lie the Northern mixed grasslands, which have a cooler temperature and a much shorter growing season.

The prevalent vegetation of the Central Great Plains ecoregion is a rich mixture of prairie mixed grasses of medium height. The ecoregion is encompassed by the tallgrass and shortgrass prairies. Wildflowers occur among the grasses, but very few trees and shrubs do. The grasslands are heavily grazed and frequently disturbed by drought and fire. Other vegetation is drought-tolerant species honey mesquite and prickly pear cacti.

The Central Great Plains prairie is part of the historical native rangeland of the Great Plains endemic American bison. It has been converted for use as grazing land for cattle since the 19th century.

The grasslands are home habitat for a resident prairie birds, while the wetlands of the region are important stopovers for birds migrating between North America and Mexico. The Cheyenne Bottoms near Great Bend, Kansas, and the Platte River in Nebraska are particularly important for migrating sandhill cranes and other waders.

The region is home to a large number of reptiles. Some of the prevalent wildlife in the southern area are coyotes, striped bark scorpions, rattlesnakes, and common house geckos.

Most of the grasslands have been converted for agriculture, with only about 5% of natural habitat remaining. Indeed, this area was so heavily overcultivated that it was damaged during the 1930s Dust Bowl period in which the topsoil was blown away in dust storms. The grasslands have since recovered, but are cropland and managed grazing ranges rather than unspoiled native grasses and perennials pasture.

The small remaining blocks of intact habitat include:

These protected areas consist of patches of intact native grassland amid cultivated rangeland, and most of the remaining natural habitats of the Great Plains are unprotected. The two largest protected areas are the Wichita Mountains Wildlife Refuge for bison and black-capped vireo, and the Salt Plains National Wildlife Refuge.

All content from Kiddle encyclopedia articles (including the article images and facts) can be freely used under Attribution-ShareAlike license, unless stated otherwise. Cite this article:
Central Great Plains (ecoregion) Facts for Kids. Kiddle Encyclopedia.