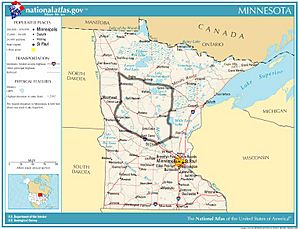 The northern portion of the region contains many softwood forests, including the expansive Chippewa National Forest. The western and southern portions of the region, meanwhile, are dotted with rolling prairie, and as such, contain the largest agricultural operations in the region. The eastern part of the region contains a great deal of both hardwood and softwood forests, and once had rich iron ore deposits. The now-depleted Cuyuna Range, which formed the southwestern border of the large Iron Range region of Minnesota, was located near Crosby and Ironton at the eastern edge of the region.

The ethnic makeup of central Minnesota is largely representative of the first settlers who came to the region. People of German and Scandinavian heritage by far make up the majority of the region’s residents, though there is also a sizable Native American population. Two of the state’s largest reservations, the Leech Lake Indian Reservation and the White Earth Indian Reservation, are located within the boundaries of central Minnesota. In addition, the small Mille Lacs Indian Reservation is also located within the region, along the southshores of Mille Lacs Lake, from near the city of Garrison to Isle.

Although the 1996 film Fargo and its television series are largely set in the region’s cities of Brainerd and Bemidji, the accents of those living in central Minnesota are not nearly as pronounced as those in the franchise. The central Minnesotan dialect can be said to be analogous to that of the entire Upper Midwest.

Central Minnesota is home to one MSA and one μSA.

Other Central Minnesota cities include:

All content from Kiddle encyclopedia articles (including the article images and facts) can be freely used under Attribution-ShareAlike license, unless stated otherwise. Cite this article:
Central Minnesota Facts for Kids. Kiddle Encyclopedia.