Corsham is a historic market town and civil parish in west Wiltshire, England. It is at the south-western edge of the Cotswolds, just off the A4 national route, which was formerly the main turnpike road from London to Bristol, 28 miles (45 km) southwest of Swindon, 20 miles (32 km) southeast of Bristol, 8 miles (13 km) northeast of Bath and 4 miles (6 km) southwest of Chippenham. Corsham is close to the county borders with Bath and North East Somerset and South Gloucestershire.

Corsham was historically a centre for agriculture and later, the wool industry, and remains a focus for quarrying Bath Stone. It contains several notable historic buildings, such as the stately home of Corsham Court. During the Second World War and the Cold War, it became a major administrative and manufacturing centre for the Ministry of Defence, with numerous establishments both above ground and in the old quarry tunnels. The early 21st century saw growth in Corsham's role in the film industry.

The parish includes the villages of Gastard and Neston, which is at the gates of the Neston Park estate.

Corsham appears to derive its name from Cosa's hām, "ham" being Old English for homestead, or village. The town is referred in the Domesday book as Cosseham; the letter 'R' appears to have entered the name later under Norman influence (possibly caused by the recording of local pronunciation), when the town is reported to have been in the possession of the Earl of Cornwall. Corsham is recorded as Coseham in 1001, as Cosseha in 1086, and at Cosham as late as 1611 (on John Speed's map of Wiltshire). The Corsham area belonged to the King in Saxon times, the area at the time also had a large forest which was cleared to make way for further expansion.

There is evidence that the town had been known as "Corsham Regis" due to its reputed association with anglo-saxon Ethelred of Wessex, and this name remains as that of a primary school.

One of the towns that prospered greatly from Wiltshire's wool trade in medieval times, it maintained its prosperity after the decline of that trade through the quarrying of Bath stone, with underground mining works extending to the south and west of Corsham.

Numbers 94 to 112 of the High Street are Grade II* listed buildings known as the "Flemish Weavers Houses", however there is little cogent evidence to support this name and it appears more likely to derive from a handful of Dutch workers who arrived in the 17th century.

Corsham also contains the historic Georgian house, The Grove, opposite the high street, a typical example of classic Georgian architecture. 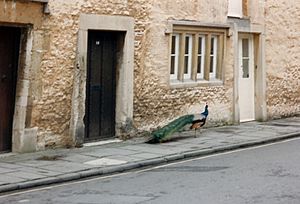 A peacock makes its way along Church Street

The stately home of Corsham Court can also be found in the town centre. Standing on a former Saxon Royal Manor, it is based on an Elizabethan manor home from 1582. Since 1745, it has been part of the Methuen estate. The house has an extensive collection of Old Masters, rooms furnished by Robert Adam and Thomas Chippendale, and parks landscaped by Capability Brown and Humphry Repton. The house is open to the public all year round excluding December and is famed locally for its peacocks, which freely wander about the streets. The owner of Corsham Court in the mid-seventeenth century was the commander of the Parliamentarian New Model Army in Wiltshire; his wife built what came to be known as the Hungerford Almshouses in the centre of town.

Corsham is the site of the disused entrance to Tunnel Quarry, which used to be visible off Pockeridge Drive.

Wiltshire Police have a base at the Springfield Community Campus.

The village of Gastard was a settlement by the 12th century. It has a 20th-century church.

Neston village was established around Neston Park, a country estate whose house was built c.1790. Neston Park is home of the Fuller family, who give their name to the Fuller, Smith and Turner brewery in London, known for Fuller's London Pride cask ale.

Pickwick was once a separate settlement and now forms the north-western part of the town. The name derives from Anglo-Saxon pic (meaning a peak or pointed hill) and wic (village). The Wiltshire Hundred Roll of 1273 refers to a "William de Pikewicke".

Corsham was the inspiration for Charles Dickens' novel The Pickwick Papers; it is thought that he borrowed the name from Moses Pickwick, a coachman who was born in Pickwick, lived in the "Hare and Hounds" inn, and ran coaches between Bath and London.

In the northeast, Corsham civil parish includes a small part of the town of Chippenham, south of the A4 road. North of the A4, besides Pickwick, are the hamlets of Middlewick, Upper Pickwick and Cross Keys.

Settlements now within Corsham's built-up area are Hudswell, Leafield, Westwells and part of Rudloe, with Moor Green and Neston further south. In the east of the parish are Easton, Thingley and Westrop, and in the southeast Chapel Knapp, Gastard, Monk's Park, The Linleys and The Ridge.

Pickwick Manor was noted by architectural historian Nikolaus Pevsner as an "unusually impressive example of a late 17th century manor house", having remnants of a 14th-century wing. More recently it has been the residence of architect Harold Brakspear and his descendants.

Beechfield is a late Georgian house in Middlewick Lane. It was extended in the early 1970s to provide additional accommodation. The house was split into residential accommodation while part of the grounds were split off in 2002 under the auspices of the Town Council to provide a Nature Area where local flora and fauna can be seen.

Gurneys House is another building of historical significance which now provides hotel accommodation and a restaurant. It also caters for special events such as weddings.

Middlewick House was occupied by Camilla Parker Bowles (now The Duchess of Cornwall) and her first husband between 1986 and 1995, when it was bought by Nick Mason of Pink Floyd.

Pickwick has the "Two Pigs", a real ale pub which is a Grade II listed building. 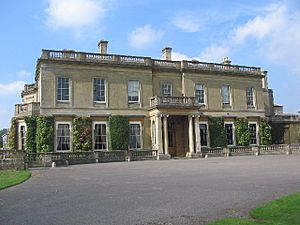 Hartham Park is a Georgian estate that includes a rare stické court.

The 2001 census demographics of the SN13 postcode area, of which Corsham comprises the major part, do not differ markedly from national figures; the unemployment rate is 2.0 per cent compared to a national 3.2 per cent, and there is a marginally higher rate of retirees (at 23.3 per cent as against 22 per cent). 23 per cent of adults are educated to degree level, against a national average of 20 per cent. 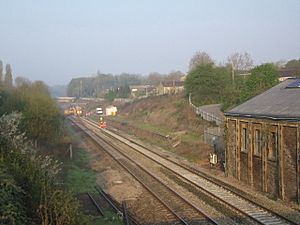 Corsham is connected to Bradford on Avon by the B3109 road, to Melksham by the B3353, and to Chippenham and Bath by the A4 Bath Road, a former turnpike from London to Bristol. Four public car parks in the town centre are operated by Wiltshire Council for a small fee. Bus companies Faresaver, and First Bristol and Bath, operate local services, as well as buses to all nearby towns.

The Great Western Main Line railway from London to Bristol, Exeter and Penzance passes through Corsham, though the local station closed in the 1960s. In May 2014 Prime Minister David Cameron gave his personal support to the campaign to reopen the station. Nearby stations, and most passenger trains, are operated by Great Western Railway. Some local services call at the nearest station at Melksham (4.5 miles, 7.2 km) while Chippenham station (4.7 miles, 7.5 km) offers frequent express services and connections. The eastern portal of Box Tunnel, built as the longest railway tunnel of its time, by Isambard Kingdom Brunel for the Great Western Railway, is at Hudswell on the western edge of the town. Corsham Railway Cutting carries the main line westward through Corsham to Box Tunnel; in 1971 6.6 hectares (16 acres) of land in the cutting were designated a Site of Special Scientific Interest for notable geology.

Corsham has had a twinning relationship with the town of Jargeau, France since 1981, and has an active twinning association. Corsham holds an annual twinning event in which musical and charity events occur, accompanied by French food and wines. There is also a boules competition for the Peter Henderson trophy which is named in memory of a local doctor and former chairman of the twinning association. As part of the 2008 event, a mock Storming of the Bastille was staged to celebrate Bastille Day, Corsham Town Hall standing in for the Parisian prison.

Corsham has a non-League football club Corsham Town F.C. who play at Southbank, were founded in 1884. They finished first in the Western Football League Premier Division in 2007.

All content from Kiddle encyclopedia articles (including the article images and facts) can be freely used under Attribution-ShareAlike license, unless stated otherwise. Cite this article:
Corsham Facts for Kids. Kiddle Encyclopedia.