Kids Encyclopedia Facts
"Craniata" redirects here. For a class of Brachiopod, see Craniforma.
For an explanation of its another name, see Vertebrate.

A craniate is a member of the Craniata (sometimes called the Craniota), a proposed clade of chordate animals with a skull of hard bone or cartilage. Living representatives are the Myxini (hagfishes), Hyperoartia (including lampreys), and the much more numerous Gnathostomata (jawed vertebrates). Formerly distinct from vertebrates by excluding hagfish, molecular and anatomical research in the 21st century has led to the reinclusion of hagfish, making living craniates synonymous with living vertebrates.

However recent studies using molecular phylogenetics has contradicted this view, with evidence that the Cyclostomata (Hyperoartia and Myxini) is monophyletic; this suggests that the Myxini are degenerate vertebrates, and therefore the vertebrates and craniates are cladistically equivalent, at least for the living representatives. The placement of the Myxini within the vertebrates has been further strengthened by recent anatomical analysis, with vestiges of a vertebral column being discovered in the Myxini.

In the simplest sense, craniates are chordates with well-defined heads, thus excluding members of the chordate subphyla Tunicata (tunicates) and Cephalochordata (lancelets), but including Myxini, which have cartilaginous skulls and tooth-like structures composed of keratin. Craniata also includes all lampreys and armoured jawless fishes, armoured fish, sharks, skates, and rays, and teleostomians: spiny sharks, bony fish, lissamphibians, temnospondyls and protoreptiles, sauropsids and mammals. The craniate head consists of a brain, sense organs, including eyes, and a skull.

In addition to distinct crania (sing. cranium), craniates possess many derived characteristics, which have allowed for more complexity to follow. Molecular-genetic analysis of craniates reveals that, compared to less complex animals, they developed duplicate sets of many gene families that are involved in cell signaling, transcription, and morphogenesis (see homeobox).

In general, craniates are much more active than tunicates and lancelets and, as a result, have greater metabolic demands, as well as several anatomical adaptations. Aquatic craniates have gill slits, which are connected to muscles and nerves that pump water through the slits, engaging in both feeding and gas exchange (as opposed to lancelets, whose pharyngeal slits are used only for suspension feeding). Muscles line the alimentary canal, moving food through the canal, allowing higher craniates such as mammals to develop more complex digestive systems for optimal food processing. Craniates have cardiovascular systems that include a heart with two or more chambers, red blood cells, and oxygen transporting hemoglobin, as well as kidneys. 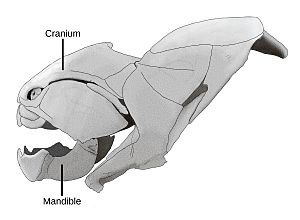 Craniata, including this extinct fish (Dunkleosteus sp.), are characterized by the presence of a cranium, mandible, and other facial bones.

Linnaeus (1758) used the terms Craniata and Vertebrata interchangeably to include lampreys, jawed fishes, and terrestrial vertebrates (or tetrapods). Hagfishes were classified as Vermes, possibly representing a transitional form between 'worms' and fishes.

Løvtrup (1977) argued that lampreys are more closely related to gnathostomes based on a number of uniquely derived characters, including:

The validity of the taxon "Craniata" was recently examined by Delarbre et al. (2002) using mtDNA sequence data, concluding that Myxini is more closely related to Hyperoartia than to Gnathostomata - i.e., that modern jawless fishes form a clade called Cyclostomata. The argument is that, if Cyclostomata is indeed monophyletic, Vertebrata would return to its old content (Gnathostomata + Cyclostomata) and the name Craniata, being superfluous, would become a junior synonym.

The new evidence removes support for the hypothesis for the evolutionary sequence by which (from among tunicate-like chordates) first the hard cranium arose as it is exhibited by the hagfishes, then the backbone as exhibited by the lampreys, and then finally the hinged jaw that is now ubiquitous. In 2010, Philippe Janvier stated:

Although I was among the early supporters of vertebrate paraphyly, I am impressed by the evidence provided by Heimberg et al. and prepared to admit that cyclostomes are, in fact, monophyletic. The consequence is that they may tell us little, if anything, about the dawn of vertebrate evolution, except that the intuitions of 19th century zoologists were correct in assuming that these odd vertebrates (notably, hagfishes) are strongly degenerate and have lost many characters over time.

Phylogenetic tree of the Chordate phylum. Lines show probable evolutionary relationships, including extinct taxa, which are denoted with a dagger, †. Some are invertebrates. The positions (relationships) of the Lancelet, Tunicate, and Craniata clades are as reported.

All content from Kiddle encyclopedia articles (including the article images and facts) can be freely used under Attribution-ShareAlike license, unless stated otherwise. Cite this article:
Craniate Facts for Kids. Kiddle Encyclopedia.