Since 1998, the Ulster Museum, Armagh Museum, Ulster Folk and Transport Museum and the Ulster American Folk Park have been administered by the National Museums and Galleries of Northern Ireland.

The Linen Hall Library, the oldest library in Belfast, has endured many changes of fortune since its foundation in 1788, but has maintained a vision of providing access to literature and local studies to the population at large. 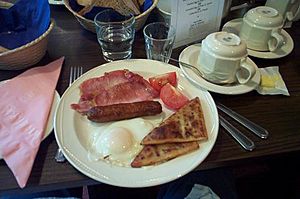 The best known traditional dish in Northern Ireland is the Ulster fry. Two other popular meals are fish and chips or 'Bangers and Mash' (Sausages and Creamed Potatoes)

A unique speciality to Northern Ireland is Yellowman. Yellowman is a chewy toffee-textured honeycomb and is sold in non-standard blocks and chips and is associated with the Ould Lammas Fair in Ballycastle, County Antrim, where it is sold along with other confectionery and often dulse.

Dulse is commonly used in Ireland, where it can be used to make white soda bread. It can be found in many health food stores or fish markets and can be ordered directly from local distributors. it is also traditionally sold at the Ould Lammas Fair. It is particularly popular along the Causeway Coast. Although a fast-dying tradition, many gather their own dulse. Along the Ulster coastline from County Down to County Donegal in the Republic of Ireland, it is eaten dried and uncooked as a snack. 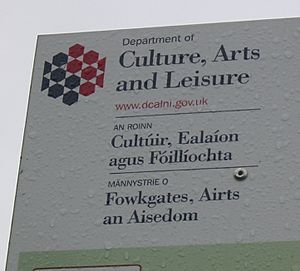 The brand identity of the Department of Culture, Arts and Leisure in Northern Ireland as shown on this sign is displayed in English, Irish and Ulster Scots

At the 2001 census, Chinese was the most widely spoken minority language in Northern Ireland, with Shelta, Arabic and Portuguese also spoken by a significant number of people. Since the census, however, an influx of people from recent EU accession states is likely to have significantly increased numbers of speakers of languages from these countries. Detailed figures on these changes are not yet available. 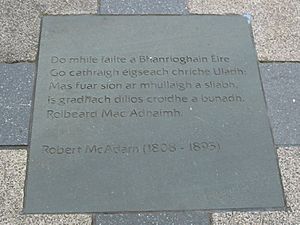 Despite its small geographical size, Northern Ireland prolifically produces internationally renowned writers and poets from a wide variety of disciplines. Irish language literature was the predominant literature in the pre-Plantation period. The Ulster Cycle is pertinent to the history of literature in the territory of present-day Northern Ireland. Ulster Scots literature first followed models from Scotland, with the rhyming weavers, such as James Orr, developing an indigenous tradition of vernacular literature. Writers in the counties which now form Northern Ireland participated in the Gaelic Revival. 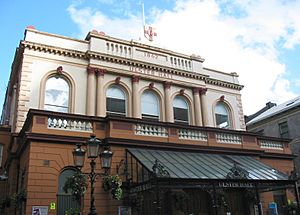 Ulster Hall, a venue for concerts and performance.

Noted actors from Northern Ireland include:

Northern Ireland Screen, a government agency financed by Invest NI and the European Regional Development Fund, provides financial support to film and television productions in Northern Ireland. Among the works it has supported is the 2011 HBO television series Game of Thrones, which is filmed principally in Belfast's Paint Hall studios and on location elsewhere in Northern Ireland.

Noted musicians from Northern Ireland include:

Traditional songs commonly associated with Northern Ireland, and Belfast in particular would be I'll Tell Me Ma and Mickey Marley's Roundabout.

A traditional song of the Unionist and Loyalist communities would be The Sash, which may be considered offensive or at least distateful by the Nationalist communities, particularly when it is used to threaten or incite violence. 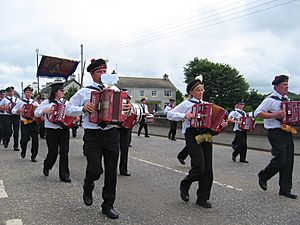 The flax flower, representing the linen industry, has been used as a neutral symbol – as for the Northern Ireland Assembly.

Celebrations to mark the anniversary of the Battle of the Boyne are held every Twelfth of July and draw huge crowds. The Apprentice Boys of Derry also organise commemorative events. The bowler hat is a symbol of Orangeism.

All content from Kiddle encyclopedia articles (including the article images and facts) can be freely used under Attribution-ShareAlike license, unless stated otherwise. Cite this article:
Culture of Northern Ireland Facts for Kids. Kiddle Encyclopedia.