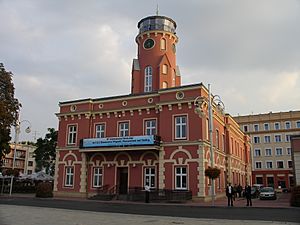 Częstochowa is a city in south Poland on the Warta River. It has 248,894 residents. It has been in the Silesian Voivodeship (administrative division) since 1999, and was once the capital of Częstochowa Voivodship (1975-1998).

The town is known for the famous monastery of Jasna Góra Monastery, which is the home of the Black Madonna painting, a shrine of the Virgin Mary. Every year, thousands of people from all over the world come to Częstochowa to see it.

The name Częstochowa means Częstoch's place, and comes from the name of a person, Częstoch. It is mentioned in medieval documents also as Częstobor and Częstomir. Częstochowa is also known as Czestochowa, Czenstochov, and Chenstochov.

Currently, the city is one of the main tourist attractions in the area. It attracts hundreds of thousands of visitors every year. The Black Madonna of Częstochowa, kept at the Jasna Góra Monastery, is a very popular attraction.

All content from Kiddle encyclopedia articles (including the article images and facts) can be freely used under Attribution-ShareAlike license, unless stated otherwise. Cite this article:
Czestochowa Facts for Kids. Kiddle Encyclopedia.