Denmark is a town in Oxford County, Maine, United States. The population was 1,197 at the 2020 census. A number of ponds and lakes are located within the town. 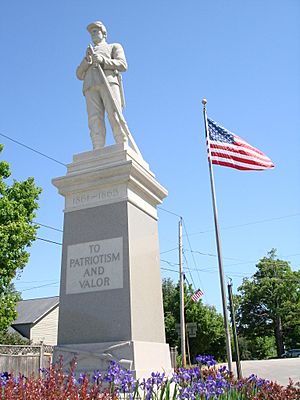 The land was once part of Pequawket (now Fryeburg), village of the Sokokis Abenaki Indians. Attacked by Captain John Lovewell in 1725 during Dummer's War, the tribe abandoned the area and fled to Canada. The township combined a grant made by the Massachusetts General Court to Fryeburg Academy, Foster's Gore and a strip from Brownfield. Several settlers came from Andover, Massachusetts. It was incorporated as Denmark on February 20, 1807, and named in a show of solidarity with Denmark. That country's capital, Copenhagen, was attacked in 1801 and 1807 by the Royal Navy, which in 1775 had attacked Portland.

Farmers found the soil to be very stony and sandy, producing fair yields of potatoes, corn and oats. But the town did have excellent water powers at the streams, and mills were established to manufacture grain, long lumber, barrel staves, sashes, blinds and doors. Denmark Village was established at the foot of Moose Pond, whose outlet, Moose Pond Brook, provided the best water-power site. Today, the town is site of summer camps. Camp Wyonegonic, founded 1902, is the oldest girls' camp in the country. Also in Denmark is Camp Walden, established in 1916.

The town is crossed by State Routes 117 and 160. It is bordered by the towns of Bridgton to the northeast, Sebago to the southeast, Hiram to the south, Brownfield to the southwest, and Fryeburg to the northwest.

There were 479 households, of which 28.6% had children under the age of 18 living with them, 57.6% were married couples living together, 6.7% had a female householder with no husband present, 4.6% had a male householder with no wife present, and 31.1% were non-families. 23.0% of all households were made up of individuals, and 8.3% had someone living alone who was 65 years of age or older. The average household size was 2.40 and the average family size was 2.80.

The school system that serves Denmark is known as Maine School Administrative District 72 or MSAD 72. MSAD 72 also serves the municipalities of Brownfield, Fryeburg, Lovell, Stoneham, Stowe and Sweden in addition to Denmark.

All content from Kiddle encyclopedia articles (including the article images and facts) can be freely used under Attribution-ShareAlike license, unless stated otherwise. Cite this article:
Denmark, Maine Facts for Kids. Kiddle Encyclopedia.