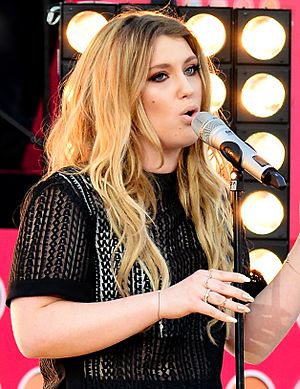 Gabriella Michelle "Ella" Henderson (born 12 January 1996) is an English singer-songwriter. She competed in the ninth series of The X Factor (UK). She finished in sixth place despite being a favorite to win. Her first studio album, Chapter One (2014), reached #1 in the United Kingdom. On the album were the singles "Ghost", and the top 20 singles "Glow" and "Yours".

Henderson began singing around the age of three. She taught herself to play the piano a few years later. She began putting on shows for her family.

All content from Kiddle encyclopedia articles (including the article images and facts) can be freely used under Attribution-ShareAlike license, unless stated otherwise. Cite this article:
Ella Henderson Facts for Kids. Kiddle Encyclopedia.