Figure Eight Island is a barrier island in the U.S. state of North Carolina, just north of Wrightsville Beach, widely known as an affluent summer colony and vacation destination. The island is part of the Wilmington Metropolitan Area, and lies between the Intracoastal Waterway and the Atlantic Ocean. As a private island, Figure Eight can only be reached by boat or via a guarded causeway swing bridge—the only private bridge over the Intracoastal Waterway in the Southeast.

Nicknamed "The Hamptons of the South", the island has been a destination for celebrities and politicians—including former U.S. Vice President Al Gore and Senator John Edwards—and a summer residence for noted businessmen, including John J. Mack and William Johnston Armfield.

Figure Eight Island was first acknowledged in 1762, during the reign of King George III, as a tract in a royal land grant to James Moore, the brother of Roger Moore of Orton Plantation, son of James Moore, Royal Governor of the Province of Carolina, and grandson of Sir Rory O'Moore. In 1775, the island passed from James Moore to Cornelius Harnett and became known as The Banks. In 1795, Harnett's property was purchased at an auction by James Foy and the island became part of Poplar Grove Plantation and was renamed Foy Island and also popularly called Woods Beach. Foy Island remained a part of the Plantation for the next 160 years.

During Prohibition in the 1930s, an illegal whiskey still was operated by Rod Rogers, a local fisherman, on the north end of the island. The remains of another still were found nearby.

During World War II, the United States Coast Guard maintained a structure and small watertower on the island, which itself was patrolled via horseback. Coast Guard Auxiliary craft monitored the surrounding inlets. Republic P-47 Thunderbolt and Bell P-39 Airacobra aircraft based at Bluenthenthal Field used the island for strafing practice.

In 1954 Hurricane Hazel hit the East Coast and destroyed much of the development from Myrtle Beach up to Topsail Beach, with more than 15,000 homes and structures completely destroyed and another 39,000 homes damaged. Beach properties were no longer in as high demand, and many landowners wanted to sell their properties. During this time the Mayor of Wilmington, Dan Cameron, and his brother Bruce Cameron began the process of acquiring the island from George Hutaff and the Foy family. The Camerons paid the Foys $50,000 for their portion of the land, and then purchased two areas of adjoining marshland for $25,000 apiece in 1955. For the next 10 years the property lay dormant. The Cameron brothers joined their cousin, Raeford Trask, and investor Richard Wetherill, forming the Island Development Company, to develop the real estate on the island. They named the island Figure Eight to indicate Rich's Inlet Creek's crooked paths in the marsh. At this time, the only way to access the island was by boat, so the Island Development Company approached Champion Davis, owner of the marshland off Porters Neck, on acquiring more land to build a bridge to the island from the mainland. Davis turned down an offer to partner with the company. The Island Development Company eventually purchased two small tracts and a small parcel of land from the members of Edgewater Club to build a roadway bridge that now leads to Figure Eight Island's bridge. The first bridge was built on top of a government surplus landing ship tank. 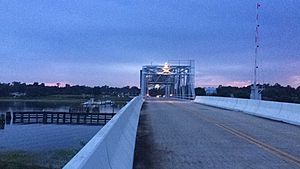 The Camerons hired Richard Bell Associates to design Figure Eight's development concept. John Oxenfeld and Haywood Newkirk, Sr. were brought on to design the early houses. The first lots sold for as little as $5,000, and the first house was constructed in 1966. On March 30, 1971 the Camerons sold Figure Eight Island to Young M. Smith, Jr., an attorney and developer from Hickory, North Carolina, for $4 million. Smith's company, The Litchfield Company, was already in the process of building a luxury condominium complex near Pawleys Island, South Carolina. When the change of ownership over Figure Eight took place, thirty houses and one hundred and twelve lots were sold. Smith brought architects Ligon Flynn and Henry Johnston in on the development project as well as landscape architect Dick Bell. Smith's wife was the grand niece of the late Julian Price, a wealthy insurance executive of Jefferson Standard Life Insurance Company in Greensboro. Price's son, Ralph Clay Price, who inherited the business, left his niece and her brothers as heirs to the Price estate. Much of their fortune was invested in the development of Figure Eight Island. The local marina club opened on August 11, 1973.

While Figure Eight enjoyed early success in home and lot sales in the early 1970s, the recession hit The Litchfield Company hard and its subsidiary, Figure Eight Development Company, went into bankruptcy in 1974. The marina club closed down. After two open auctions were held at the New Hanover County Courthouse in 1975, Continental Illinois National Bank and Trust Company emerged as the island's new mortgage holder. The marina club reopened in 1976, and adopted the title of Figure Eight Yacht Club in the spring of 1977. In 1980 a modern bridge from Port Royal, Virginia was bought to replace the old bridge connecting the island to the mainland for $1.5 million. 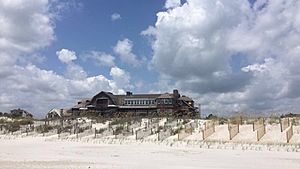 A house under construction in 2016

In September 1996, Hurricane Fran damaged the island properties. All utilities and telephone lines were knocked out, septic tanks overflowed, the roads were blocked by debris and standing water, all docks were washed out, and one house was completely destroyed. It took one week to pump floodwater out of low-lying areas. The yacht club building was closed for seven months for repairs.

The island has tennis courts, a boat ramp, Yacht club and a marina. The Eagle Point Golf Club, located on the mainland, has connections to Figure Eight, having been built by several Island residents. The Figure Eight Yacht Club is a private island club for dining and formal events. Figure Eight is not accessible to the public by car but is by boat. The majority of the residence of Figure Eight are seasonal. An estimated 90 percent of the homes on Figure Eight Islands are second homes and fewer than one hundred of the homes are on the rental market. Homes on Figure Eight average above $2 million in property value.

Figure Eight Island is located just north of Wrightsville Beach and Wilmington. The island has an area of 1,300 acres (526 ha), most of which is marshland. 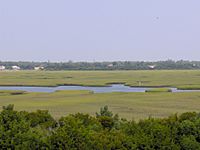 Between the northernmost part of Figure Eight and Lea-Hutaff Island lies Rich Inlet, one of the few natural inlets in North Carolina. To the south, between the island and Wrightsville Beach, lies Mason Inlet. The former is a stable inlet, while the latter is migratory.

Due to the island's proximity to the warm waters of the Gulf Stream, the ocean temperatures off of Figure Eight are comparable to destinations much further south and considerably warmer than the ocean off the Outer Banks.

Figure Eight Island has never been subject to water quality advisories, which have been issued for nearby beaches. 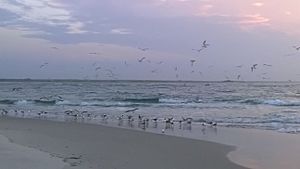 Seagulls fishing in Rich Inlet, along the Figure Eight shore

The local chapter of the National Audubon Society has recorded the presence of 104 different species of birds on Figure Eight. Most live in Rich Inlet, generally considered the southernmost nesting area for the critically endangered Great Lakes piping plover. In 2015, approximately 800 Least Tern nested on northern section of the island, making it the largest Least Tern colony in the state, and one of the largest on the Eastern seaboard. Other birds that nested there include American Oystercatchers, Common Terns, Black Skimmers, Piping Plovers, Wilson’s Plovers and Willets. Savannah Sparrows, Atlantic Plovers, Greater Yellowlegs, and pelicans have been found in Mason Inlet to the south. 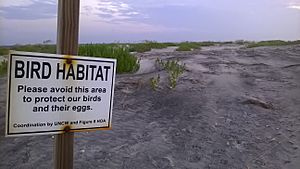 Protected bird habitat on the northern side of Figure East, along Rich Inlet

Sea turtles have been monitored and protected on the island since 1986, and continue to be monitored on a daily basis. Sea turtle nests are cordoned off for protection. In 2016, there were 8 nests on the island. In 2001 and 2002, the homeowners association commissioned a survey of endangered plants and animals on the island, including piping plovers, sea turtles, sea beach amaranth, and marine mammals. The University of North Carolina at Wilmington surveyed the island's bird populations as part of the $50,000 "Mason Inlet Relocation Project" commissioned by New Hanover County.

All content from Kiddle encyclopedia articles (including the article images and facts) can be freely used under Attribution-ShareAlike license, unless stated otherwise. Cite this article:
Figure Eight Island Facts for Kids. Kiddle Encyclopedia.