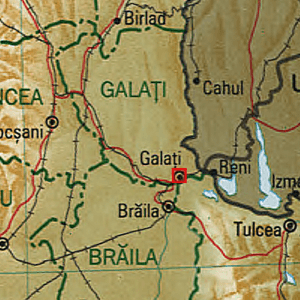 Galaţi ( Turkish: Kalas; German: Galatz; Polish: Gałacz) is a city in the eastern part of Romania, in the historical region of Moldavia. It is the capital city of Galaţi County.

It lies on the west bank of the Danube River, near Moldova and Ukraine.

All content from Kiddle encyclopedia articles (including the article images and facts) can be freely used under Attribution-ShareAlike license, unless stated otherwise. Cite this article:
Galaţi Facts for Kids. Kiddle Encyclopedia.