Grange-over-Sands is a town and civil parish located on the north side of Morecambe Bay in Cumbria, England, a few miles south of the Lake District National Park. In the 2001 census the parish had a population of 4,042, increasing at the 2011 census to 4,114. Historically part of Lancashire, the town was created as an urban district in 1894. Since the 1974 local government re-organisation, it has been of the South Lakeland district of Cumbria, though it remains part of the Duchy of Lancaster.

The town developed in the Victorian era from a small fishing village, and the arrival of the railway made it a popular seaside resort on the north side of Morecambe Bay, across the sands from Morecambe. The 'over-Sands' suffix was added in the late 19th or early 20th century by the local vicar, who was fed up with his post going to Grange in Borrowdale near Keswick.

The River Kent used to flow past the town's mile-long promenade but its course migrated south, away from Grange. The sands or mudflats with dangerous quicksands became a grass meadow now grazed by small flocks of sheep. As a result of sustained easterly winds in the early part of 2007, the river has begun to switch its course back across the bay, and it remains to see whether the meadows survive.

The clean, sea air was believed to be of benefit to tuberculosis sufferers, and in 1891 one of the first sanatoriums in the country was established at Meathop. Not only was the air believed to have a therapeutic effect but also the local spring water. 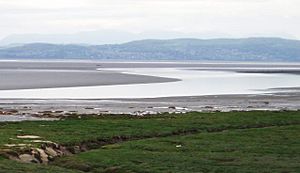 Looking across Morecambe Bay towards Grange-over-Sands 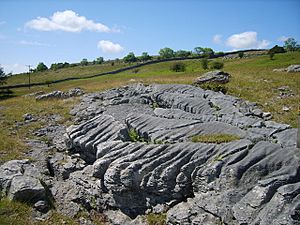 Limestone pavement on the flanks of Hampsfell

The town is a centre for tourists exploring the southern Lakeland fells, and is home to a number of hotels, B&Bs, and holiday properties. Within the town itself, there is an ornamental duck pond and a traffic-free promenade.

Above the town is Hampsfield Fell (generally abbreviated to Hampsfell), crowned by 'Hampsfell Hospice', a sturdy limestone tower monument offering shelter to the rain-drenched walker, as well as the finest viewpoint of all the foothills of the outlying southern Lakeland fells. On the roof, a large compass pointer and list of peaks identify the greater and lesser landmarks in the magnificent panorama. Inside, painted boards commemorate its construction, praise the view and welcome the visitor. Hampsfell is the subject of a chapter of Wainwright's book The Outlying Fells of Lakeland. It reaches 727 feet (222 m). The summit of Hampsfell is surrounded by several flat, incised areas of exposed limestone, called limestone pavement. The best and most extensive pavements lie to the north of the hospice.

Adjacent to Grange are Lindale, to the north-east, Cartmel to the north-west, with its priory to which the village was once the 'grange' or farm, and Allithwaite to the west. The country house Holker Hall, which was built on land which once belonged to the priory, is nearby. Until its move to Backbarrow in 2010, the stables at Holker Hall housed the Lakeland Motor Museum.

In more recent years, the town has become a place of interest for ghost hunters, after several tourists staying at a holiday cottage in the area reported seeing the ghost of a beautiful young woman with scarring across her neck. There have also been several reports of screaming being heard from the cottage and surrounding area. Locals are said to claim that the woman was the wife of a fisherman in the late 19th century, who supposedly murdered her. The cottage, now a popular resort for holiday makers, remains a huge source of controversy for locals and tourists alike.

Grange-over-Sands railway station, which serves the town, was opened by the Ulverston and Lancaster Railway on 1 September 1857 and is now served by the Furness Line, giving connections to Ulverston and Barrow-in-Furness to the west, and Lancaster, Preston, Manchester Piccadilly and Manchester Airport to the east.

The main road access is the A590, which runs between the M6 and Barrow-in-Furness. Before the building of the railway, the main way of reaching Grange was the road across the Sands of Morecambe Bay from Hest Bank.

A new public swimming pool, the Berners Pool, opened in 2003 at a cost of £3.5 million. It was designed by architects Hodder Associates and won a RIBA Design Award in 2004, but closed in 2006 due to high running costs and structural problems. It has now (2014) been demolished, and is being replaced by an affordable housing development.

A new pool and leisure centre was planned as part of the redevelopment of the lido site. However this development is facing some opposition as it would involve filling in the Grade II listed Grange-over-Sands lido and this is being contested. By 2013 this proposal had collapsed.

A local newspaper, Grange Now, which reports on local news, comes out once a month and is delivered free to over 5,000 homes on the Cartmel Peninsula.

There is one primary school, the Grange-over-Sands Church of England Primary School. There is no secondary school, so most pupils attend the nearby schools in either Cartmel to the west or Milnthorpe to the east.

All content from Kiddle encyclopedia articles (including the article images and facts) can be freely used under Attribution-ShareAlike license, unless stated otherwise. Cite this article:
Grange-over-Sands Facts for Kids. Kiddle Encyclopedia.