Guan Yin (also spelled Kwan Yin) is the Chinese name of Avalokiteshvara, the Bodhisattva of compassion and mercy.

She takes various forms all over the world, in different eras and various forms. She can appear in the world as either male or female. 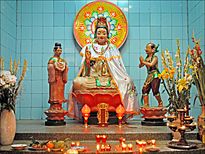 Depiction of Guan Yin in Vietnam.

The Threefold Lotus Sutra describes Guan Yin as a Bodhisattva who can take any form. She can transform into a male, female, adult, child, elder, human, or non-human, in order to teach the Dharma. The ''Threefold Lotus Sutra'' states that Guan Yin has 33 different manifestations. Seven of these are female.

Representations of Guan Yin in the Song Dynasty were masculine in appearance. Images and statues of Guan Yin during this time later became both genders because of the Lotus Sutra. Because Guan Yin is considered to be the personification of compassion and kindness, and a mother-goddess as well as a patroness of mothers and sailor, the representation of the Bodhisattva became mostly female around the 12th century. In the modern period, Guan Yin is often depicted as a beautiful, young white-robed woman, a depiction which derives from the earlier Pandaravasini form.

In China, she is often depicted as young and beautiful, wearing white robes and a necklace of Indian/Chinese royalty. In the left hand she holds a vase that contains the elixir of immortality and in the right hand, she holds a willow branch. Guan Yin wears a crown with an image of Amitabha Buddha.

Guan Yin is a prominent figure in Journey to the West. One of the four classics of Chinese literature, it tells the tale of Tang Dynasty monk Chen Hui's epic pilgrimage with three other traveling companions. Guan Yin enlists Monkey King (Sun Wukong), previously imprisoned by the Buddha, to aid Chen Hui in his pilgrimage to India for Sutra and Reliquary. She later recruits Zhu Bajie (Pigsy) after his defeat at the staff of Monkey King, and Sha Wujing (Sandy) as a body guard for Chen Hui.

All content from Kiddle encyclopedia articles (including the article images and facts) can be freely used under Attribution-ShareAlike license, unless stated otherwise. Cite this article:
Guan Yin Facts for Kids. Kiddle Encyclopedia.