Kids Encyclopedia Facts
This page is about Hadleigh in Suffolk. For the town in Essex, see Hadleigh, Essex. For the 1969–76 British television series, see Hadleigh (TV series).

Hadleigh is an ancient market town and civil parish in South Suffolk, East Anglia, situated, next to the River Brett, between the larger towns of Sudbury and Ipswich. The headquarters of Babergh District Council are located in the town, which at the 2011 census had a population of 8,253.

Skeat, in his 1913 The Place-Names of Suffolk, says this:

Guthrum, King of the Danes, is said to be buried in the grounds of St Mary's Church in the town. He was defeated by King Alfred at the battle of Edington in 878.

Hadleigh received its market charter in 1252. In 1438 administration was passed from manorial control to trustees. The market was eventually sold to Babergh District Council in the late 20th century. 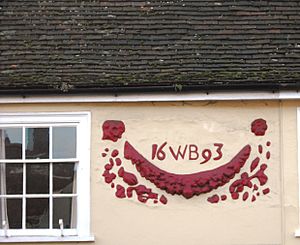 Hadleigh was one of the East Anglian towns that derived its prosperity from its wool and cloth industries. It has a 15th-century timber-framed Guildhall and many fine examples of timber and brick listed buildings, some with highly detailed 17th century plasterwork or "pargeting". Most of these buildings can be found in the High Street, Angel Street, Benton Street and the immediately surrounding area.

The town has a total of 246 listed buildings. The Georgian East House, on George Street, has been designated a Grade II listed building since 26 April 1950. In March 2013 plans by Babergh District Council to redevelop the site and build houses on the land behind were withdrawn after strong local protest. The property was once used for a range of community events and activities. Opponents of the plan had argued that the adjacent land had been used as a village green for the last 20 years.

Originating in the 14th century, the Grade II* listed Toppesfield Bridge, over the River Brett, is the oldest in the county still carrying vehicles. It was widened in 1812. 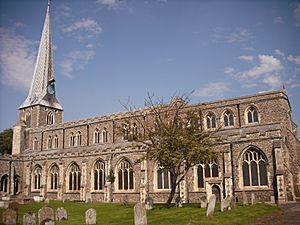 The Anglican church of St Mary the Virgin

The Anglican church of St Mary the Virgin is an active parish church in the archdeaconry of Ipswich in the Diocese of St Edmundsbury and Ipswich. Its earliest parts date from medieval times. On 26 April 1950 the church was designated a Grade I listed building by English Heritage. The Grade I designation is the highest of the three grades and is for buildings that are "of exceptional interest, sometimes considered to be internationally important."

According to the Annals of St Neots, a chronicle compiled in Bury St Edmunds, king Guthrum (later called Æthelstan, died c.890) was buried at Headleage, which is usually identified as Hadleigh. He may have built the original Saxon church at this site, traces of which were revealed in the churchyard to the south of the porch, in 1829 and in 1984. There is no real evidence, however, that Guthrum was the founder of the church. In the Doomsday Book there is mention of a church at "Hetlega" being owned by Archbishop Lanfranc of Canterbury.

The deanery, with a tall Tudor gatehouse in brick built just before the Reformation, next to the church, is also a Grade I listed building. 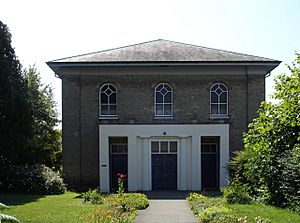 Like its near neighbour, East Bergholt, Hadleigh was known during the 16th century for its Protestant radicalism. Rowland Taylor, a preacher from the town, and his curate, Richard Yeoman, were martyred during the reign of Queen Mary I. The Oxford Movement was said to have been founded in 1833 following a meeting in the deanery.

In April 2011 the historic clock bell in the Anglican church was silenced by a pair of nesting jackdaws.

Hadleigh United Reformed Church, situated off Market Place, was originally the town's Congregational Church, first founded in 1688. It was rebuilt between 1825 and 1832), with seating for 1,000 and was restored in 1890–91. The current minister is Rev Bryn Rickards. The Baptist chapel Baptist Chapel, probabaly founded in 1814, was built in 1830 and had a gallery added in 1884. It was enlarged in 1875. The Salvation Army was established in 1889 a hall in Duke Street in 1920. St. Joseph's Roman Catholic Church was built in 1966. The congregation was first established, in 1937, in a former corset factory which was destroyed by fire in 1964. The town also previously had a Primitive Methodist Chapel which was built in 1848 and enlarged in 1875. There was also an Episcopal Mission Chapel built on Hadleigh Heath in 1878 and restored in 1891; it was disused by 1912.

The annual Hadleigh Show, first held in 1840 and also known as 'the May Show', is one of the oldest one-day agricultural shows in East Anglia. Organised by the Hadleigh Farmers' Agricultural Association, the show enjoyed 12,500 visitors in 2013.

Benton End House, a Grade II* listed building on Benton Street, was originally a large medieval farmhouse. From 1940 it was the home of Sir Cedric Morris, artist and plantsman, who formed the East Anglian School of Painting and Drawing there. Students included Lucian Freud and Maggi Hambling.

The Ansell Community Centre was set up in 2004 as a charity with the object of providing community facilities for the people of Hadleigh and surrounding area. It is a private company limited with six trustees. Membership of the ACC is open to anyone who is interested in the work of the charity. Currently there are over 30 members. The centre runs the digital cinema ("Hollywood in Hadleigh") and two lunch clubs. The ACC also organises community events such as "The Hidden Gardens of Hadleigh" and, together with churches in Hadleigh, some festivals throughout the year. The building is owned by the United Reformed Church.

The BBC television series Lovejoy was partly filmed in Hadleigh for its first two series. 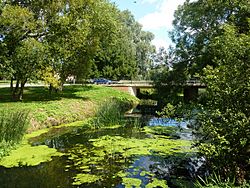 Hadleigh has a Non-League football club Hadleigh United F.C. who play at Millfield. The town is also home to Hadleigh Rugby Club (HRFC). Both the football and rugby club boast thriving youth and senior sections.

The town's bowls and cricket clubs are among the oldest in Suffolk. The bowls club was founded in 1754. The cricket club is over 200 years old and pre-dates the Marylebone Cricket Club.

At Benton End Farm there is an equestrian centre and a paintball centre.

All content from Kiddle encyclopedia articles (including the article images and facts) can be freely used under Attribution-ShareAlike license, unless stated otherwise. Cite this article:
Hadleigh, Suffolk Facts for Kids. Kiddle Encyclopedia.