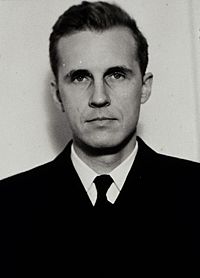 Rear Admiral Harley Dean Nygren (December 12, 1924 – November 17, 2019) was an American military officer and photographer. He was in the United States Coast and Geodetic Survey Corps and in the National Oceanic and Atmospheric Administration Commissioned Officer Corps (NOAA Corps). He was the first Director of the NOAA Corps from 1970 through 1981.

All content from Kiddle encyclopedia articles (including the article images and facts) can be freely used under Attribution-ShareAlike license, unless stated otherwise. Cite this article:
Harley D. Nygren Facts for Kids. Kiddle Encyclopedia.