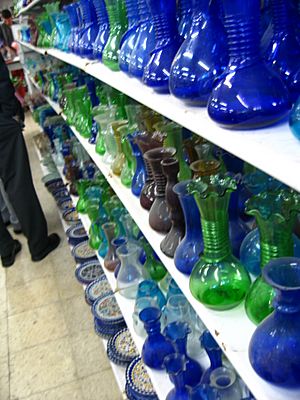 A display of Hebron glass at a shop in Hebron.

Hebron Glass (Arabic: زجاج الخليل‎code: ar is deprecated , zajaj al-Khalili ) refers to glass produced in Hebron as part of a flourishing art industry established in the city during Roman rule in Palestine. Hebron's Old City still contains a quarter named the "Glass-Blower Quarter" and Hebron glass continues to serve as a tourist attraction for the city.

Traditionally, the glass was melted using local raw materials, including sand from neighbouring villages, sodium carbonate (from the Dead Sea), and coloring additives such as iron oxide and copper oxide. Nowadays, recycled glass is often used instead. Glass production in Hebron is a family trade, the secrets of which have been preserved and passed down by a few Palestinian families who operate the glass factories located just outside the city. The products made include glass jewellery, such as beads, bracelets, and rings, as well as stained glass windows, and glass lamps. However, due to the Palestinian-Israeli conflict, glass production has suffered a decline.

The glass industry in Hebron was established during Roman rule in Palestine (63 BCE-330 CE). As the ancient Phoenician glass industry shrank from the exposed cities along the eastern Mediterranean coastline, the industry migrated inland, to Hebron in particular. Glass artifacts from Hebron dating to the 1st and 2nd centuries have been found, and are on exhibit as part of the Drake Collection. Stained glass windows made of Hebron glass dating to the 12th century are found in the structure built over the Cave of Machpelah, which served as a church during the Crusader era in Palestine. Another example of stained glass windows produced in Hebron are those adorning the Dome of the Rock in the Old City of Jerusalem.

"Hebron’s medieval reputation in glassmaking is corroborated by some of the many Christian pilgrims who visited the city over the centuries. Between 1345 and 1350, Franciscan monk Niccolò da Poggibonsi noted that “they make great works of art in glass.” In the late 15th century, the German friar Felix Faber and his companions also stopped in this “exceeding ancient city,” and he described how “we came forth from our inn, and passed through the long street of the city, in which work-people of divers crafts dwelt, but more particularly workers in glass; for at this place glass is made, not clear glass, but black, and of the colors between dark and light.”

While acknowledging that the production of glass in Palestine dates back to Roman period, Nazmi Ju'beh, director of RIWAQ: Centre for Architectural Conservation, contends that the practices of today's glass industry in Hebron most likely emerged in the 13th century CE. This corresponds to what foreigners observed, like Jacques de Vitry who around 1080 mentioned Acre and Tyre, (but not Hebron), as glass-producing cities, while by 1483, when Felix Fabri visited the city, he described passing "through the long street of the city, in which work-people of divers crafts dwelt, but particularely workers in glass; for at this place glass is made, not clear glass, but black, and of the colours between dark and light."

Ju'beh notes that an alternate theory assigns today's techniques to the Venetian glass tradition and that still other researchers claim they were already extant at the time of the Crusades and were carried back to Europe from Hebron, possibly originating in Syria. 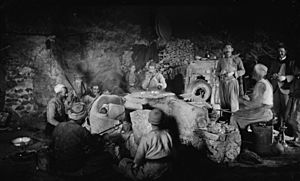 Glass produced by these factories were typically functional items including drinking and eating vessels, as well as olive oil and later petrol-based lamps, although the factories also produced jewellery and accessories. Bedouins of the Negev (Naqab), the Arabian Desert, and Sinai were the primary purchasers of jewellery, but large exports of expensive Hebron glass items were sent by guarded camel caravans to Egypt, Syria, and the Transjordan. Marketing communities of Hebron glass were established in al-Karak (Crac) in southern Jordan and Cairo in Egypt by the 16th century.

The glass industry was a principal employer and a generator of wealth for its owners. Well known for glass production throughout the Arab world, Western travellers to Palestine in the 18th and 19th century provided descriptions of the Hebron glass industry as well. For example, Volney in the 1780s, wrote that: "They make there great quantity of coloured rings, bracelets for the wrists and legs, and for the arm above the elbows, besides a variety of other trinkets, which are sent even to Constantinople." Ulrich Jasper Seetzen noted during his travels in Palestine in 1807-09 that 150 persons were employed in the glass industry in Hebron, while later, in A New and Complete History of the Holy Bible as Contained in the Old and New Testaments (1844), Robert Sears writes, "The population of Hebron is considerable: the inhabitants manufacture glass lamps, which are exported to Egypt. Provisions are abundant, and there is a considerable number of shops."

Later in the century, the production declined due to competition from imported European glass-ware. However, the products of Hebron continued to be sold, particularly among the poorer populace, particularly by travelling Jewish traders from the city. At the World Fair of 1873 in Vienna, Hebron was represented with glass ornaments. A report from the French consul in 1886 suggests that glass-making remained an important source of income for Hebron with four factories making 60,000 francs per annum.

The tradition of glassblowing continues in the 21st century in three factories located outside of the traditional quarter of the Old City, north of Hebron and south of the neighboring town of Halhul which generally produce functional household souvenirs. Two of the factories are owned by the Natsheh family. These are displayed in large halls close to each of the factories.

Hebron glass is an attraction for both domestic and foreign tourists. Today, however, due to ongoing export problems, the decline in tourism, and restrictions on Palestinian freedom of movement in the aftermath of the Second Intifada, industry production has suffered. According to Nazmi al-Ju'bah, the director of RIWAQ: Centre for Architectural Conservation, under these circumstances, the survival of the Hebron glass industry is in question. 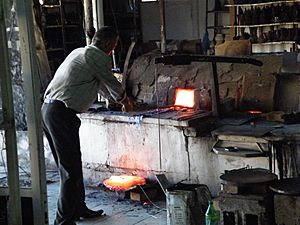 Hebron glass was traditionally produced using sand from the village of Bani Na'im, east of Hebron, and sodium carbonate taken from the Dead Sea. Instead of sand, recycled glass is the primary raw material used to make Hebron glass today.

The precise production process is a trade secret maintained by the few Palestinian families who run the factories which continue to produce Hebron glass today, passed through generations by apprenticing children. As one master of the craft said, "You can learn to play the 'oud at any age, but unless you begin [glasswork] as a child, you will never become a master."

According to the Holy Land Handicraft Cooperative Society, the blowing technique employed is the same as was used by the ancient Phoenicians, though archaeologists and historians of glass agree that glassblowing was not common until the last few centuries BCE. Molten glass is withdrawn from a furnace on the end of an iron pipe, which is blown into as a metal tool called a kammasha is used to shape the glass. It is returned to the furnace and reshaped by the same process before being detached from the pipe and placed into a cooling chamber. 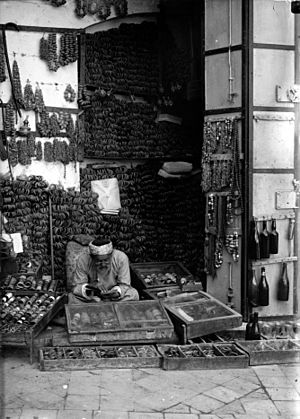 Glass beads for jewellery have traditionally been made in Hebron. Blue beads and glass beads with 'eyes' (owayneh) were made for use as amulets since they were considered particularly effective against the evil-eye. In the Museum of Mankind collections, there exist several glass necklaces that were made in Hebron during the Mandate period or earlier. Besides necklaces made of blue and green beads, and 'eyes' beads, there are examples of beads of small hands, also called a Hamsa, representing the hand of Fatimah, the daughter of the prophet Muhammad. Most of a woman's jewellery was given to her at marriage; in the early 1920s, in Bayt Dajan, a glass bracelet (ghwayshat) made in Hebron would be considered a necessary part of the jewellery of a bride's trousseau.

In 1799, English traveller William George Browne mentioned the production of "Coarse glass beads...called Hersh and Munjir" in Palestine; The "Munjir" (Mongur) were large beads, while the Hersh (Harish) were smaller. These Hebron glass beads were used for trade, and export primarily to Africa from the early to mid-19th century. Spread throughout West Africa, in Kano, Nigeria, they were grounded on the edges to make round beads fit together on a strand more suitably. There, they picked up the name "Kano Beads", although they were not originally produced in Kano. By the 1930s, their value had decreased; in 1937, A. J. Arkell recorded the beads being sold "for a song" by Sudanese women to Hausa traders in Dafur.

All content from Kiddle encyclopedia articles (including the article images and facts) can be freely used under Attribution-ShareAlike license, unless stated otherwise. Cite this article:
Hebron glass Facts for Kids. Kiddle Encyclopedia.