Hurricane Florence was a powerful and long-lived Cape Verde hurricane, as well as the wettest tropical cyclone on record in the Carolinas and the ninth-wettest tropical cyclone to affect the contiguous United States. The sixth named storm, third hurricane, and the first major hurricane of the 2018 Atlantic hurricane season, Florence originated from a strong tropical wave that emerged off the west coast of Africa on August 30, 2018. Steady organization resulted in the formation of a tropical depression on the next day near Cape Verde. Progressing along a steady west-northwest trajectory, the system acquired tropical storm strength on September 1, and fluctuated in strength for several days over open ocean. An unexpected bout of rapid intensification ensued on September 4–5, culminating with Florence becoming a Category 4 major hurricane on the Saffir–Simpson scale with estimated maximum sustained winds of 130 mph (215 km/h).

Strong wind shear tore the storm apart, and Florence degraded to a tropical storm by September 7. Shifting steering currents led to a westward turn into a more suitable environment; the system regained hurricane strength on September 9 and major hurricane status by the following day. At 16:00 UTC on September 10, Florence again became a Category 4 hurricane, later reaching a new peak intensity with 1-minute winds of 140 mph (220 km/h) and a central pressure of 939 mbar (27.7 inHg). Afterwards, Florence weakened slightly as it underwent an eyewall replacement cycle, but began to restrengthen late on September 11. However, increasing wind shear caused the storm's winds to gradually taper over the next few days, though the storm's wind field continued to grow. By the evening of September 13, Florence had been downgraded to a Category 1 hurricane, though the storm began to stall as it neared the Carolina coastline. Early the next day on September 14, Florence made landfall just south of Wrightsville Beach, North Carolina, and weakened further as it slowly moved inland.

Early in the storm's history, the system brought squall conditions to the Cape Verde islands, resulting in some landslides and flooding; however, overall impacts were negligible. With the threat of a major impact in the Southeastern and Mid-Atlantic United States becoming evident by September 7, the governors of North Carolina, South Carolina, Virginia, Georgia, and Maryland, and the mayor of Washington, D.C. declared a state of emergency. On September 10 and September 11, the states of North Carolina, South Carolina, and Virginia all issued mandatory evacuation orders for some of their coastal communities, as it was expected that emergency management personnel would be unable to reach people in those areas once the storm arrived.

Despite making landfall as a weakened Category 1 hurricane, it still had enough wind speed to uproot trees and cause widespread power outages throughout the Carolinas. The same wind shear that weakened the storm also caused its forward motion to stall for several days after making landfall; moving forward at only 2-3 miles per hour it continually dumped heaving rains along coastal areas from September 13, when the outer rain bands first began to be felt, to September 15, when the storm was still stalled out only a few miles west of Wilmington. Coupled with storm surge, this caused widespread flooding along a wide stretch of North Carolina coast from New Bern to Wilmington. As the storm moved inland, from September 15-17, heavy rain caused widespread inland flooding, inundating cities such as Fayetteville, Smithfield, Lumberton, Durham, and Chapel Hill, as major rivers such as the Neuse River, Eno River, Cape Fear River, and Lumber River all spilled over their banks. Most major roads and highways in the area experienced some flooding, with large stretches of I-40, I-95 and US 70 remaining impassable for days after the storm had passed. The city of Wilmington was cut-off entirely from the rest of the mainland, as all routes in and out were impassable. The storm also spawned tornadoes in several locations along its path. Several locations experienced record-breaking rainfall in excess of 30 inches, and at least 36 deaths were attributed to the storm, and damages are so far estimated to be over $17 billion (2018 USD).

Disruptive rainfall and strong winds affected Brava, Fogo, and Santiago in Cape Verde, causing some landslides and localized flooding. Impacts from the storm were otherwise minimal, with no material damage reported.

Large swells and rip currents from the storm reached Bermuda on September 7. 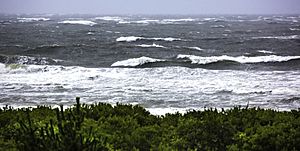 Large swells on the New Jersey coast on September 9

On September 13, New Bern, North Carolina, was inundated with storm surge around 6 feet (1.8 m). Water levels rose in the west side of the Pamlico Sound. A gauge in Oriental, North Carolina, recorded water height of about 5.5 feet (1.7 m) above normal on the Neuse River. Employees at ABC affiliate WCTI-TV (which serves the surrounding market that includes Greenville and Jacksonville) were forced to evacuate its New Bern studio facility that evening due to the rising waters; WCTI station staff were asked to relocate to the studios of sister station WPDE in Myrtle Beach, South Carolina to continue coverage of the storm, with WCTI switching to a simulcast of WPDE's live coverage of the storm until its staff relocated to the WPDE facility. Reports indicated that around 150 people were in need of rescue in New Bern because of the heavy flooding. 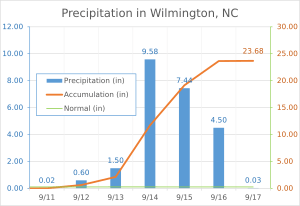 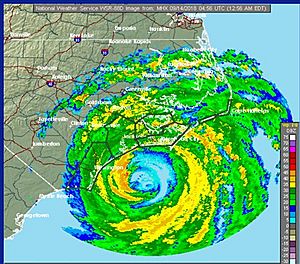 Florence made landfall in Wrightsville Beach, North Carolina on September 14, and by mid-morning rescuers had already evacuated more than 200 people from floodwaters, with about 150 more awaiting rescue. The storm had reportedly cut power to more than 500,000 customers in North and South Carolina by the time of landfall and caused the roof of a hotel in Jacksonville, North Carolina to collapse that morning.

Heavy rains continued to affect the Carolinas after landfall. By the morning of September 16, Wilmington had recorded more rain from Florence than any other single weather event in the city's history. Additionally, Florence contributed to the wettest year in Wilmington history, with annual rainfall totals eclipsing the previous record set in 1877. A weather station in Swansboro, North Carolina, recorded 33.90 inches (861 mm) of rain, while another near Marion, South Carolina, measured 18.13 inches (461 mm), establishing new records for a tropical cyclone in both states.

The entirety of Wilmington (pop: 120,000) became entirely isolated, as all roads to the city flooded and were deemed impassable. The majority of residents remained without electricity, as of September 16. The city's airport and port were also closed. Although cell phone service remained operational, excess demand strained networks. More than 450 people required rescue across Wilmington. Woody White, New Hanover County chairman of the board of commissioners, issued a statement advising all travelers to avoid the Wilmington area. There was a report of looting and burglary at a Wilmington area Family Dollar, with the theft of non-essential items such as sports apparel and athletic shoes during the height of the storm. The city-wide curfew issued in advance of the storm was extended because of these incidents.

Early on September 17, a tornado was confirmed in Elm City, North Carolina.

In the aftermath of the storm, over 40,000 workers from across the U.S. and Canada went to the Carolinas to help restore power, according to the Edison Electric Institute.

All content from Kiddle encyclopedia articles (including the article images and facts) can be freely used under Attribution-ShareAlike license, unless stated otherwise. Cite this article:
Hurricane Florence (2018) Facts for Kids. Kiddle Encyclopedia.