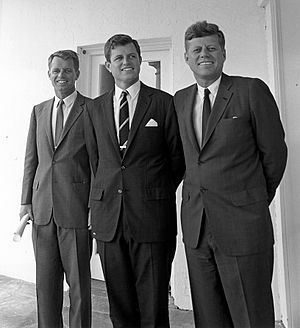 The Kennedy family have been a famous family in American politics and have had several members chosen to important positions in the U.S. Government. The Kennedys are Irish Catholic Democrats and mostly live in Boston and Hyannisport, Massachusetts.

Patrick Kennedy (1823-1858) was the youngest son of farmer James Kennedy Sr. (1770-1840) and Maria Maiden (1779-1836). He was the first kennedy to reside in the U.S.A and the first member of the family to engaged in business and politics, and from him the dynasty began. He was also the first generation of the family as a businessman and politician. He married Bridget Murphy (1821-1888).

P. J. Kennedy (1858-1929), youngest son of Patrick and Bridget. He was the second generation of the family as also a businessman and politician. He became a political figure in the Democratic Party in Boston, after he took his sets in the Massachusetts House of Representatives and in the Massachusetts Senate. He married Mary Augusta Hickey (1857-1923).

Joseph P. Kennedy, Sr. (1888-1969), eldest son of P. J. and Mary. He was the third generation of the family as another businessman and politician. He married Rose Elizabeth Fitzgerald (1890-1995), the daughter of the mayor of Boston. He was a successful businessman and was very wealthy. He was friend with Franklin D. Roosevelt and served as the U.S.A ambassador to Great Britain. He wanted to create a family of powerful politicians, and succeeded. He became the patriarch of the family.

Joseph Patrick "Joe" Kennedy, Jr. (1915-1944) was the eldest son of Joseph, Sr. and Rose. His father had wanted him to go into politics, but before that happened, he was killed in a plane crash in World War II.

John Fitzgerald "Jack" Kennedy (1917-1963) served in the Navy in World War II and then went to politics. He served in the House of Representatives and the U.S. Senate before being elected President in 1960. He was shot and killed in 1963.

Rosemary Kennedy (1918-2005) had mental illness. Part of her brain was cut off and she was placed in a mental hospital.

Kathleen Agnes Kennedy (1920-1948) married an English nobleman, was widowed and died in a plane crash.

Eunice Kennedy Shriver (1921-2009) married Sargent Shriver, the head of the Peace Corps and the U.S.' man in France. In 1968, she started the Special Olympics to honor her sister Rose.

Robert Francis "Bobby" Kennedy (1925-1968) the third son of Joseph, Sr. and Rose. He also went into politics, and served as Attorney General, the top lawyer in the nation, and as a U.S. Senator. In 1968, he tried to be President, but was shot while campaigning in California.

Jean Kennedy Smith (born 1928) is the last living of Joseph P. Kennedy Sr.'s children. She used to be the USA ambassador to Ireland.

Edward Moore "Ted" Kennedy (1932-2009) the youngest son of Joseph, Sr. and Rose. He served for many years as a U.S. Senator from Massachusetts.

All content from Kiddle encyclopedia articles (including the article images and facts) can be freely used under Attribution-ShareAlike license, unless stated otherwise. Cite this article:
Kennedy family Facts for Kids. Kiddle Encyclopedia.