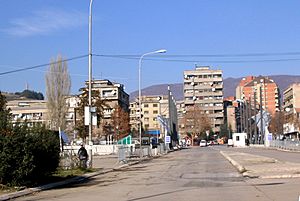 This is the bridge over the river that divides the city between Albanians and Serbians. The Serbian area of Mitrovica is much smaller. with an area of 5 square kilometres (1.9 sq mi). This image was taken looking to the north.

Kosovska Mitrovica is a town in North Kosovo, Serbia. Over 71,601 people live in Kosovska Mitrovica, mostly in the south. The town used to be called Titova Mitrovica. Originally it was named after Saint Dimitrije.

There is the University of Pristina in Kosovska Mitrovica.

All content from Kiddle encyclopedia articles (including the article images and facts) can be freely used under Attribution-ShareAlike license, unless stated otherwise. Cite this article:
Kosovska Mitrovica Facts for Kids. Kiddle Encyclopedia.