Mellor is a village in Greater Manchester, England, lying between Marple Bridge and New Mills, Derbyshire.

Buildings in the village include St. Thomas' Church, a primary school, golf course, sports club, a riding school, three pubs (the Royal Oak, The Devonshire Arms and The Oddfellows Arms) and the late-17th-century Mellor Hall.

The village was a civil parish in the county of Derbyshire until 1936 when it was transferred to Marple Urban District in Cheshire; in 1974, it became part of the Metropolitan Borough of Stockport in Greater Manchester.

The ancient past of Mellor is slowly being discovered as a result of a long-term archaeological survey of the area by means of excavations and geophysical surveys, including ground-penetrating radar. Although some history had survived by means of written records and local tradition, it has become clear that such knowledge only scratched the surface and that the extent of Mellor's past had passed from such memories.

The origin of the name Mellor is uncertain. In one Celtic dialect, the term would translate to "the bare (or rounded) hill". The name Mellor does not appear in the Norman-era Domesday Book, although the neighbouring town of Ludworth (recorded as Lodeuorde) is listed. It is possible that Ludworth originally included Mellor and that they split into two distinct areas at a later date.

The Saxons built a church at the southernmost end of the Iron Age settlement some time in the 7th or 8th centuries. The church was subsequently destroyed and rebuilt, possibly several times. St. Thomas Church has the oldest known wooden pulpit in Britain, possibly the world. Dating from the reign of Edward II (1307–1327), it is octagonal and carved from a single piece of wood. The church also has a 12th-century font.

According to local legend, Mellor Hall is built on the foundations of the house of a Norman nobleman. By the time of the English Civil War, Marple had become totally dominant in the region. So much so that John Bradshawe, Lord President of the High Court of Justice and Lord of Marple Hall was the first to sign the death warrant of King Charles I. 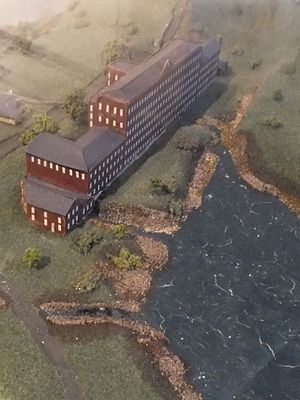 A model of Mellor Mill and the 'Roman Lakes'

One of the local stories involves the fate of Samuel Oldknow's mill at the Roman Lakes, which was destroyed by fire in November 1892. Accidents at such mills were common, but so were violent rivalries. There have been claims made for both cases. The only thing that can be stated with any certainty is that the mill was gutted by the blaze.

The other major figure in Mellor at this time was William Radcliffe, a mill owner who invented many devices for improving the textile industry.

At the height of the Industrial Revolution, coal-power supplanted water-power as the driving force and minable coal seams were found in Mellor. Relatively recently, the British Coal Board strip-mined those seams that still had sufficient coal in them.

Mellor began to grow during the Victorian era. Before it was very small and consisted of a few houses and Moorend. Nowadays, Moorend is considered a part of Mellor.

Mellor lies in the foothills of the Pennines, just outside the area of Derbyshire known as the High Peak. Nearby villages include Rowarth, Marple Bridge, Ludworth and Mill Brow. The town of Marple lies across the River Goyt. A little further away are the towns of Romiley and New Mills and the villages of Hayfield and Strines. Mellor Church and Mellor Hall are situated on the top of a ridge that is separated from the bulk of the village of Mellor by a gully and stream.

The oldest part of inhabited Mellor runs alongside the river Goyt, stretching from the oldest parts of Marple Bridge up the hill, spreading out where the slope becomes gentle. Newer parts of the village run down Longhurst Lane, the old turnpike road, and into former farmland released for building by Townscliffe Farm. At the very top of Mellor is the junction of Five Ways. One of these roads runs to Mellor, a second to Rowarth, a third to Strines and New Mills, the fourth to a water treatment plant and a fifth to many farms on the edge of Mellor. Spoil heaps indicate mining operations here and coal was mined in the general area during the Industrial Revolution.

Because of the topology, Mellor lies on one of the easier points for entering the Pennines from the Mersey Basin by road or foot. It is also on the flight path for air traffic into Manchester Airport, formerly known as Ringway.

Mellor is located on a gritstone area in an area of the Peak District referred to as the Dark Peak. (In contrast, the limestone region of the Peak District is referred to as the White Peak.) The underlying geology of the area belongs to the Carboniferous Millstone Grit series which are outcrop as the Middle Grit. Below this are shales and mudstones and older Gritstones such as the Kinder Scout Grit which forms the Kinder Plateau to the East. Small seams of coal have been located in Mellor, over the gritstone. Boulder clay, left from the Ice Age, can usually be found just below the surface-level soil. At one point, all of the Peak District – Mellor included – was submerged beneath relatively warm waters. Evidence for this is the limestone region, with the limestone containing fossils of coral and other shallow-depth warm-water creatures.

The gritstone comes from deposits laid down about 300 million years ago over the limestone. Shallow coal deposits lie on top of the gritstone, although most of these have long since been mined. Very deep coal deposits do exist further into the Pennines, but again many of these have been worked out. Although evidence exists for volcanos elsewhere in the Peak District,

The soil in Mellor is fairly rich in peat and can bog easily, but there are no permanent peat bogs within Mellor itself. The only other noteworthy detail on Mellor's geology is the almost complete absence of iodine, particularly in the water of the River Goyt. If no other source of iodine is in the diet, the consequent iodine deficiency can lead to an enlarged thyroid gland, a condition is known as "Derbyshire Neck", or goitre.

There are a number of additional societies within Mellor, ranging from church activities to painting to rambling.

Some of these societies run charitable events in the area. For example, every four years the local residents open a number of private gardens during an event known as the Mellor Open Gardens day. The purpose of the event is to raise funds for Cancer Research UK and the support of the local Parish Centre. Another event is the Mellor March, in which ramblers carry out a sponsored walk to traverse the boundary of Mellor.

As with all towns and villages of this age, there are legends, myths and mysteries.

One local mystery involves Thomas Brierley, the treasurer of the freemasonry lodge in Mellor around 1785. He had his gravestone carved, using a masonic cipher called 'Pigpen', some years prior to his death. The text at the head of the stone says "Thomas Brierley made his ingress July 16, 1785". The cipher at the foot of the gravestone says "Holiness of the Lord". The Pigpen cipher was used by Freemasons in the 18th century to keep their records private, and the cipher on Thomas Brierley's grave seems have a non-standard symbol for the letter "S". According to some, Thomas Brierley fell to his death from the church tower, but other sources disagree so this story may be an urban legend. To add to the mystery, a bronze plaque was added to the stone in recent times with more cipher upon it, the cipher used being similar but not identical.

A few small businesses work out of the old mills that scatter the countryside, and there is a limited amount of farming, principally grazing livestock: sheep and beef cattle. Horses are also common, and horse-riding is a popular pursuit in the area, which benefits from many ancient bridleways.

According to the 2001 UK census, the industry of employment of residents of Mellor aged 16–74 was 18.3% manufacturing, 16.3% retail and wholesale, 12.2% health and social work, 12.0% education, 11.7% property and business services, 6.6% public administration, 4.6% construction, 4.5% transport and communications, 4.2% hotels and restaurants, 2.7% finance, 2.0% agriculture, 0.7% energy and water supply, and 4.2% other. Compared with national figures, the town had a relatively high proportion of people working in education, agriculture, and public administration, and low levels of people working in finance and transport and communications. The census recorded the economic activity of residents aged 16–74, 1.8% students were with jobs, 3.4% students without jobs, 3.1% looking after home or family, 4.1% permanently sick or disabled, and 1.1% economically inactive for other reasons.

Mellor Lacrosse Team has enjoyed success in its 80-year history, winning the North of England men's championship on many occasions, the most recent being 2006. The club has three men's senior teams and a junior section; it has recently created a ladies team. The club also regularly plays host to touring teams from the US at junior and senior level.

Mellor Football Club was founded in 1923 by members of the Hambleton Family. Mellor FC's home ground is Wood Lane in Marple and the club currently boasts four open-age teams. Mellor 1st XI are currently in the Premier Division of the Lancashire & Cheshire League and won the Stockport Senior Cup in the 2004–05 season.

The tennis club was formed between 1945 and 1950. It originally had only one grass court; this was later extended to include two shale courts and later to include two all-weather courts. These were then replaced with astroturf. It has three men's and three ladies' teams in the Slazenger North East Cheshire League.

The golf course runs through a sparsely populated section of the oldest inhabited part of Mellor. The course offers a view over Greater Manchester and, on a clear day, the Welsh Mountains can be seen.

Mellor is served by three bus routes. The 375, operated by Stagecoach and Little Gem, runs to Stockport via Marple and Hazel Grove; the service is hourly on weekdays. The 802 and 819 school services also run to Mellor from Rose Hill and Harrytown respectively.

The village does not have its own railway station; the closest is Marple station.

All content from Kiddle encyclopedia articles (including the article images and facts) can be freely used under Attribution-ShareAlike license, unless stated otherwise. Cite this article:
Mellor, Greater Manchester Facts for Kids. Kiddle Encyclopedia.