Michoacán is a state in south-west Mexico. About 4,000,000 people live there. Its capital is called Morelia. 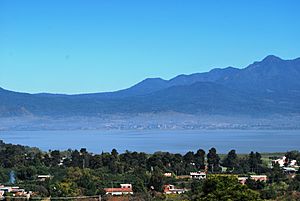 View of Lake Patzcuaro from Tzintzuntzan

The state is located in the center west of the Mexican Republic, on the extreme southwest of the central highlands. It borders the states of Mexico, Querétaro, Guerrero, Guanajuato, Jalisco and Colima, with a 217 kilometres (135 mi) coastline on the Pacific Ocean. The state has a territory of 58,836.95 square kilometres (22,717.07 sq mi), making it the sixteenth largest in Mexico (exactly at midpoint among Mexican states in Area). In addition, it also has 1,490 square kilometres (580 sq mi) of marine territory off its Pacific coast. 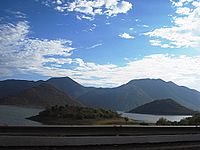 The state is crossed by the Sierra Madre del Sur, the Trans-Mexican Volcanic Belt and the Inter-mountain Valleys region. The Sierra Madre del Sur crosses the state northwest to southeast for approximately 200 kilometres (120 mi) in the southwest between the municipalities of Chinicuila and Arteaga along the Pacific Coast. It is considered to be a continuation of the Sierra Madre Occidental. Peaks in this range average about 2,900 metres (9,500 ft) above sea level, with the largest being the Cerro de las Canoas. The Mexican Trans Volcanic Belt crosses the state from west to east toward the Toluca Valley and Valley of Mexico. This mountain range is marked by appearance of many volcanoes, active, dormant, and extinct alike. This system is subdivided into regions such as the Sierra de Tancítaro, Sierra de Periban, Sierra de San Angel and others. The best-known volcano in this region is the Paricutín volcano.

The state has a considerable natural system of waterways, including parts of two of the country's largest rivers, the Lerma and the Balsas. These waterways are divided into three regions, called the North, Central and South. The North region includes the Lerma Basin. On the Lerma River is the Tepuxtepec Dam which has a capacity of 371 million m3. Rivers that empty into the Lerma in Michoacán include the Tlalpuhahua, Cachivi and Duero. Another river basin here is that of Lake Cuitzeo, which extends over an area of 3,618 square metres (38,940 sq ft). The two main rivers that feed this lake are the Grande de Morelia and Queréndaro. 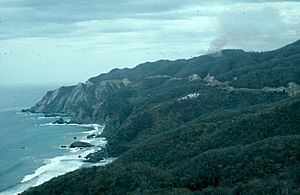 The Central region is represented by lakes Pátzcuaro and Zirahuén. Lake Pátzcuaro has a surface area of 1,525 km2. This lake is fed by a number of surface and subterranean water flows with the principal rivers leading here including the San Gregorio and Chapultepec. This lake has five islands within it called Janitzio, Yunuén, La Pacanda, Tecuén, Jarácuaro, Urandén and Carián. Lake Zirahuén has an area of 615 square kilometres (237 sq mi) and is fed by streams such as Manzanilla and Zinamba. These two lakes are considered to be the main tourist attraction of the state.

Most of the state's rivers and streams are located in the South region of the state, with the Balsas River being the most important. The most important tributaries of this river include the Cutzamala, Carácuaro and Tepalcatepec rivers. Within this region is the coastal watershed, which is the area between the Sierra Madre del Sur and the coastline. This area includes small rivers such as the Coahuayana, Aquila, Ostula, Motín del Oro, Coire, Cachán and Nexpa which flow directly into the Pacific.

Much of the climate of the state is determined by altitude and other geographical features. Average temperatures vary from 13 °C (55 °F) to 29 °C (84 °F). Lower temperatures correspond with the highland areas in the north and east while the lower south and west, called La Costa (the coast) or Tierra Caliente (hot land) register higher temperatures. In the hotter lowlands, high temperatures regularly exceed 30 °C (86 °F) and have been known to reach over 40 °C (104 °F) in the summer. The lowest temperatures are registered in highland areas such as the Sierra de Coalcomán and the Sierra del Centro located near the border with the State of Mexico. Except for the Tierra Caliente, most of the state can experience freezing temperatures in the winter. Rainfall is also dependent on altitude with the lowlands receiving less rain than the mountain areas. There is a well-defined rainy season which extends from June to October over the entire state. 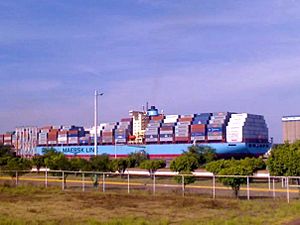 The economy of the state is based on agriculture, livestock, forest products, fishing and crafts. Most of the population is employed in three sectors: agriculture (34%), mining and manufacturing (23%), and commerce (37%).

Agriculture occupies over a million hectares of land in the state or 20% of the land area. Three-fifths of this agriculture occurs only during the rainy season. Irrigation farming is restricted to areas such as the Apatzingán Valley, the Bajío area of Michoacán, the Zamora Valley and some others. Principal crops include corn, sorghum, avocados, strawberries, peaches, wheat, limes, sugar cane and mangos. While corn accounts for 43% of the crops harvested, Michoacán is the largest producer of avocados in Mexico and in the world. Forty three percent of farmland in the territory is dedicated to the raising of livestock, including cattle, domestic fowl, sheep, goats and pigs. In 2007, the state's production of meat, dairy and eggs was valued at over four billion pesos. 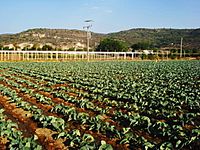 Sixty percent of the state is covered in forest, with the most economically important of these located in the higher elevations at the eastern side. These forests mostly produce lumber and resin. These areas are estimated at 2,160,000 hectares, over half of which is pine forest. The most productive forests are located in the central and eastern portions of the state. Rainforest areas are estimated at 460,500 hectares. One problem facing the forested areas of the state is unsustainable logging. In addition to exploitable forest, there are also ecological reserves with tourist importance, especially the various monarch butterfly sanctuaries in the extreme east of the state.

Michoacán's lakes, rivers and coastline make it an important producer of fish and seafood, both caught in the wild and farmed. The most important commercial fishing is for tilapia and carp.

Mining is an important economic activity in the state, which is mostly concentrated on the eastern side near the Mexico State border. However, iron is mined in the Lázaro Cárdenas area near the coast. Both metallic and non-metallic minerals are mined in the state. These include iron, copper, zinc, cadmium, lead, silver, gold, fill dirt, sand, gravel, lime, limestone, marble, and others. There are thirteen principal mining areas: Tlalpujahua, Angangueo, Los Azufres, Real de Otzumatlán, Tzitzio, Tiámaro, El Bastán, San Diego Curucupacéo, Inguarán, Las Truchas, and La Minita de Coalcomán. Michoacán is the second-largest producer of coke and third-largest producer of iron, which are essential to the steel industry, in Mexico. While there remains significant metallic deposits, their mining only contributes 1.64% to the economy.

Most industrial activity is concentrated in the central region of the state, near the capital, where a number of industrial parks are located, such as Ciudad Industrial Morelia. However. there are other areas with industry, such as Apatzingán, Zamora, Jiquilpan and Sahuayo, as well as in the Lázaro Cárdenas area. Major production areas are iron and steel (34.27%), bottling (10.43%) and paper products (8.36%). Most people in the state are employed in service and commerce, and this sector contributes 19.07% to the overall economy. Most sales are in foodstuffs, drinks and tobacco.

All content from Kiddle encyclopedia articles (including the article images and facts) can be freely used under Attribution-ShareAlike license, unless stated otherwise. Cite this article:
Michoacán Facts for Kids. Kiddle Encyclopedia.