The Newport News Sheriff's Office is a local law enforcement agency of Newport News, Virginia, headed by an elected Sheriff who serves a term of office of 4 years.

In 1634, the House of Burgesses established the boundaries of Warwick County in Jamestown. The government of the counties was to parallel that of England. First and foremost was the appointment of a sheriff. The sheriff was responsible for collecting taxes, serving warrants, maintaining order in the county, protecting the court, and running the jail. He had no deputies but could call upon the militia for help when so required.

The first Warwick County jail, courthouse and clerk’s office were built on the site where the City Farm now sits.

It was after the American Revolutionary War that the Sheriff’s Office became an elected office and the duties expanded. Now, the sheriff was a law enforcement officer assigned to keeping the peace and maintaining law and order. It was at this time the sheriff was authorized to hire constables to assist in performing duties.

In 1810, a new municipal complex was constructed in Denbigh, including a two-story jail. The sheriff’s office and two small cells occupied the first floor. And four cells were on the second. The sheriff was allocated fifty-cents per prisoner per day for food.

As time went on, expansions and renovations were made to the courthouse and jail. A new jail was built in the winter of 1899. But it became evident that “sick mortar” was used when prisoner escapes became frequent. The mortar used to bond the brick walls turned to powder when scratched. For repair, sheet iron lined cell walls.

During the 1920s and 30s, the biggest problem in the county were illegal distilleries. The jail reached peak capacity. Nearby Fort Eustis became a medium security prison for moonshiners in a seven-state area.

Citizens voted to be incorporated into Newport News in 1959. Before there was even a City of Newport News, there was a Sheriff of the region.

In August 1976, the current jail in downtown Newport News was built. It is a maximum security, seven-story building. It was originally designed to house 248 inmates. Renovations were completed in 1993.

Current jail problems parallel historic issues. The inmate population has exceeded peak capacity. During prohibition there was an abundance of illegal distilleries, while illegal drugs have become the main contemporary problem. Many crimes being committed throughout the city stem from drug activity.

It is the goal of the sheriff’s office to rehabilitate jail inmates and reduce recidivism. Educational and work programs offered inside the jail are intended to help individuals succeed outside upon release. The Sheriff's Office also provides some law enforcement services alongside the Newport News Police Department, including three K-9 dog units, fugitive and drug interdiction units, motorcycle unit, traffic unit and court security unit. 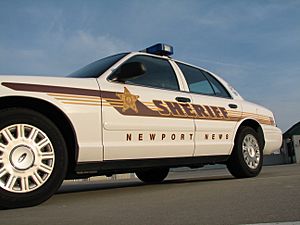 All content from Kiddle encyclopedia articles (including the article images and facts) can be freely used under Attribution-ShareAlike license, unless stated otherwise. Cite this article:
Newport News Sheriff's Office Facts for Kids. Kiddle Encyclopedia.