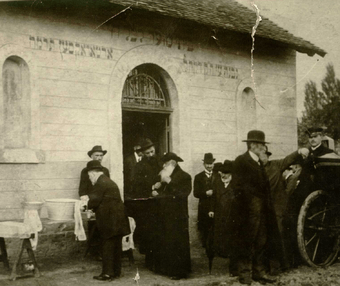 Visitors in the Orthodox Jewish cemetery in Budapest, circa 1920 (the word "Orthodox" is painted on the wall, second to the left). Traditionalist Jews in Hungary were the first anywhere to form an independent Orthodox organization in 1871.

Orthodox Judaism is a form of Judaism that interprets the teachings and scriptures in a stricter way than the rest of Judaism. Its followers often see the Talmud and its texts as given by God, as divine.

Its followers must usually promise the following:

All content from Kiddle encyclopedia articles (including the article images and facts) can be freely used under Attribution-ShareAlike license, unless stated otherwise. Cite this article:
Orthodox Judaism Facts for Kids. Kiddle Encyclopedia.