The Puente Hills are a chain of hills, one of the lower Transverse Ranges, in an unincorporated area in eastern Los Angeles County, California, in the United States. The western end of the range is often referred to locally as the Whittier Hills.

The Puente Hills lie to the south of the San Gabriel Valley and the Pomona Freeway (State Route 60), to the east of the San Gabriel River Freeway (Interstate 605), to the north of Whittier Boulevard, and to the west of the city of Diamond Bar and Chino Hills. Cities to its north are the City of Industry, Hacienda Heights, and Rowland Heights. To the south are Whittier, La Habra Heights, and Brea. The Brea-Olinda Oil Field, discovered in 1880 and still producing in 2014, is in the southernmost portion of the hills adjacent to the city of Brea. 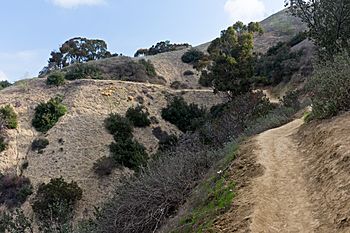 Hellman Wilderness Park is located in the western Puente Hills ("Whittier Hills") with trailheads in Whittier. It is managed by the Puente Hills Habitat Preservation Authority. It has trails into native coastal sage scrub habitats, and up to vistas of the Los Angeles Basin.

Schabarum Regional Park is partially in the eastern Puente Hills, in Rowland Heights, eastern Los Angeles County, California. It has equestrian and hiking trails in the hills. 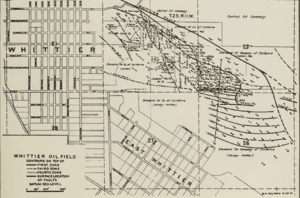 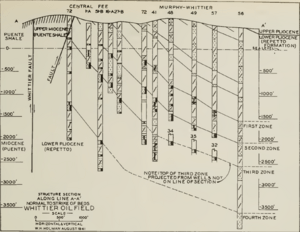 A commercial discovery was made in 1897, for what would become the Whittier Oil Field, when a well was drilled to a depth of 984 feet. The location was in the central area of production. By 1903, about 100 wells were in operation and by 1924, there were 163 commercial wells in operation.

The Puente Hills has an interesting history.

In the early 1930s an unsuccessful high-voltage experiment was made in an attempt to create rain.

A Robin Airlines passenger plane crashed in the Puente Hills killing all 29 passengers on April 16th, 1952.

In the 1953 film adaptation of H. G. Wells' science-fiction novel The War of the Worlds, the Puente Hills were the landing site of the first spacecraft in the Martian invasion, as well as an unsuccessful attempt to use a nuclear bomb against the Martians.

It was one of the sites for Nike anti-aircraft missiles in the 1950s till the late 1960s.

In the scene from Back to the Future (1985 film), Doc Brown introduces the iconic Delorean time machine in the parking lot of Puente Hills Mall.

It was the location of one of the largest landfills in the U.S. before shutting down in 2013.

All content from Kiddle encyclopedia articles (including the article images and facts) can be freely used under Attribution-ShareAlike license, unless stated otherwise. Cite this article:
Puente Hills Facts for Kids. Kiddle Encyclopedia.