Rosyth (Scottish Gaelic: Ros Fhìobh, "headland of Fife") is a town on the Firth of Forth, three miles (4.8 km) south of the centre of Dunfermline. According to the census of 2011, the town has a population of 13,440.

The town was founded as a garden city in 1909, and was built to form the coastal port of Dunfermline. Rosyth is almost contiguous with neighbouring Inverkeithing, separated only by the M90 motorway. Rosyth railway station is on the Fife Circle Line. 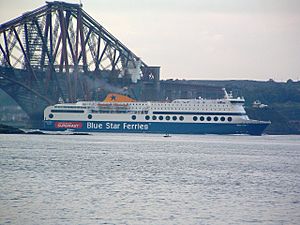 Blue Star 1 passing under the Forth Bridge in the Firth of Forth, en route from Rosyth to Zeebrugge.

The area is best known for its large dockyard, formerly the Royal Naval Dockyard Rosyth, construction of which began in 1909. The town was planned as a garden city with accommodation for the construction workers and dockyard workers. Today, the dockyard is almost 1,300 acres (5.3 km2) in size, a large proportion of which was reclaimed during construction.

Rosyth and nearby Charlestown were major centres of shipbreaking activity, notably the salvage of much of the German fleet scuttled at Gutter Sound, Scapa Flow.

The associated naval base closed in 1994, and no Royal Navy ships are permanently based at Rosyth, though small ships now return for docking and refit activities, including Sandown-class minehunters.

Rosyth's dockyards became the very first in the Royal Navy to be privatised when a company named Babcock International acquired the site in 1987. The privatisation followed almost eighty years of contribution to the defence of the United Kingdom which spanned two World Wars and the Cold War with the Soviet Union, during which Rosyth became a key nuclear submarine maintenance establishment. When the final submarine refit finished in 2003, a project to undertake early nuclear decommissioning of the submarine refit and allied facilities - Project RD83 - began pre-planning. The project was funded by MoD, in accordance with the contractual agreement in place following the sale of the dockyard, but management and sub-contracting was the responsibility of the dockyard owner, Babcock Engineering Services, a member of the Babcock International Group. The main decommissioning sub-contractor is Edmund Nuttall, and work began in 2006. The work was completed in 2010, when most of the areas occupied by the submarine refit facilities had been returned to brownfield status and were ready for redevelopment. The project completed ahead of programme and under-budget, which is unusual in nuclear decommissioning activities. Some nuclear liabilities remain, including some quantities of contaminated ion-exchange resin which was the by-product of the former submarine refitting activity.

The dockyard is the site for final assembly of the two Queen Elizabeth-class aircraft carriers for the Royal Navy's future carrier project. 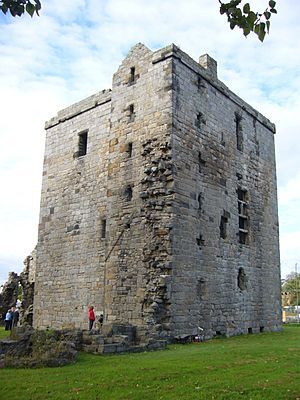 The fifteenth century Rosyth Castle stands on the perimeter of the dockyard complex, at the entry to the ferry terminal, and was once surrounded by the Firth of Forth on almost all sides, until land reclamation by the docks in the early 1900s.

Since 2002 an overnight ferry service has linked Rosyth with Zeebrugge in Belgium. This service was discontinued by Superfast Ferries in September 2008, but recommenced in May 2009 under new operator Norfolkline. They ran three sailings a week in each direction.

Norfolkline was taken over by DFDS Seaways, who have since reduced the service to freight-only, three sailings a week in each direction.

Scottish Enterprise Fife is now working in partnership with various private sector organisations to explore the future development of Rosyth. The agency is looking at ways to expand the ferry services to other European and domestic ports. It also wants to help create new business infrastructure in and around Rosyth – which in turn will bring economic benefits to Fife and beyond.

Three areas around the port of Rosyth are being developed:

Surplus land and buildings owned by engineering giant Babcock, which operates the naval dockyard, is being offered to external companies.

The main dock area – operated by Forth Ports – is ripe. Since opening in 1997, the port has seen rising timber and cargo vessels use the facility. Its warehouse and logistics facilities make an ideal choice for exporters and importers.

A private developer owned site is being developed into an £80 million business park – called Rosyth Europarc. More than 13,000 square meters of office and hi-tech manufacturing have already been developed. Companies like Intelligent Finance and Bank of Scotland are on site. To complement these developments, a new £8.4 million road is being built to provide an enhanced link to the nearby M90 motorway. Work began on the new road early in 2006, and it was completed in spring 2007.

Local company Cameron Harris Design & Build are currently developing prestigious office pavilions to the North of Rosyth at Masterton and are about to bring to the market industrial premises at Admiralty Park, where they have previously constructed premises for IDS and also Acorn Pets. Cameron Harris have lodged planning permission for the next phase of works at Admiralty Park, Rosyth which will home up to 60 jobs, the first company to relocate there is a well established European company who will use Rosyth as their UK headquarters.

A number of Ministry of Defence establishments are located both in and around the Naval dockyard at Rosyth.

In November 2016 the UK Government announced that MoD Caledonia would close in 2022.

The town has a rugby union club, Rosyth Sharks, which play in the Caledonia Midlands Three league and a football club Rosyth FC that plays in the East of Scotland Football League.

All content from Kiddle encyclopedia articles (including the article images and facts) can be freely used under Attribution-ShareAlike license, unless stated otherwise. Cite this article:
Rosyth Facts for Kids. Kiddle Encyclopedia.