The seriemas are the sole living members of the small bird family Cariamidae, which is also the only surviving lineage of the order Cariamiformes. Once believed to be related to cranes, they have been placed near the falcons, parrots and passerines, as well as the extinct Phorusrhacidae. The seriemas are large, long-legged territorial birds that range from 70–90 cm (28–35 in) in length. They live in grasslands, savanna, dry woodland and open forests of Brazil, Bolivia, Argentina, Paraguay and Uruguay. There are two species of seriemas, the red-legged seriema (Cariama cristata) and the black-legged seriema (Chunga burmeisteri). Names for these birds in the Tupian languages are variously spelled as siriema, sariama, and çariama, and mean "crested".

Both species are around 90 cm (35 in) long (the red-legged seriema is slightly bigger than the black-legged, with 90 and 70–85 cm respectively). They forage on foot and run from danger rather than fly (though they can fly for short distances, and they roost in trees). They have long legs, necks, and tails, but only short wings, reflecting their way of life. They are among the largest ground-dwelling birds endemic of the Neotropics (only behind rheas).

Ecologically, the seriema is the South American counterpart of the African secretary bird. They feed on insects, snakes, lizards, frogs, young birds, and rodents, with small amounts of plant food (including maize and beans). They often associate with grazing livestock, probably to take insects the animals disturb. When seriemas catch small reptiles, they beat the prey on the ground (Redford and Peters 1986) or throw it at a hard surface to break resistance and also the bones. If the prey is too large to swallow whole, it will be ripped into smaller pieces with a sickle claw by holding the prey in the beak and tearing it apart with the claw.

Because of these feeding behaviors, seriemas are important by eating detritivores and helping the soil get more nutrients from dead plant matter.

In contact with humans, seriemas are suspicious and if they feel threatened, usually spread their wings and face them. They walk in pairs or small groups. Although perfectly capable of flying, they prefer to spend most of their time on land. They only take flight when necessary, for example to escape a predator. Overnight they take shelter in the treetops, where they also build their nests.

The breeding biology of the seriemas is poorly known, and much of what is known comes only from red-legged seriemas. Pairs appear to be territorial and avoid others of their species while breeding, and fights between rivals have been observed. These fights involving kicking rivals, can go on for long periods of time, and involve much calling by the involved birds.

Seriemas build a large bulky stick nest, lined with leaves and dung, which is placed in a tree 1–5 m (3.3–16.4 ft) off the ground. The placement of the nest is so that the adults can reach the nest by foot rather than flying, through hops and the occasional flutter. Both sexes are involved in building the nest. They lay two or three white or buff eggs sparsely spotted with brown and purple. The female does most of the incubation, which lasts from 24 to 30 days. Hatchlings are downy but stay in the nest for about two weeks; after which they leave the nest and follow both parents. They reach full maturity at the age of four to five months. It is unknown when fledgling chicks reach sexual maturity. 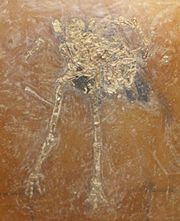 There are two living species of seriemas. The red-legged seriema, or crested cariama (Cariama cristata) is found from eastern Brazil, to central Argentina. It is bigger and nests on the ground or in bushes or trees up to 3 m (9.8 ft) above the ground. The black-legged seriema (Chunga burmeisteri) is found in northwest Argentina and Paraguay. It nests in trees.

These birds are thought to be the closest living relatives of a group of gigantic (up to 10 ft or 3.0 m tall) carnivorous "terror birds", the phorusrhacids, which are known from fossils from South and North America. Several other related groups, such as the idiornithids and bathornithids were part of Palaeogene faunas in North America and Europe and possibly elsewhere too. However, the fossil record of the seriemas themselves is poor, with two prehistoric species, Chunga incerta and Noriegavis santacrucensis, both from the Miocene of Argentina, having been described to date. Some of the fossils from the Eocene fauna of the Messel Pit (i.e. Salimia and Idiornis) have also been suggested to be seriemas, as has the massive predatory Paracrax from the Oligocene of North America, though their status remains uncertain.

All content from Kiddle encyclopedia articles (including the article images and facts) can be freely used under Attribution-ShareAlike license, unless stated otherwise. Cite this article:
Seriema Facts for Kids. Kiddle Encyclopedia.