Slave Power, also called the Slave Power conspiracy and Slaveocracy, was a term used to refer to the economic, social and political influence held by slaveholders in the South.

Southern slaveholders had a great deal power in Congress and many other federal offices up to and including the presidency.

These few very powerful men used their influence to maintain the institution of slavery.

The fear in the North was that the slave power conspiracy intended to not only to spread slavery to the Western territories but to all the states in the North. 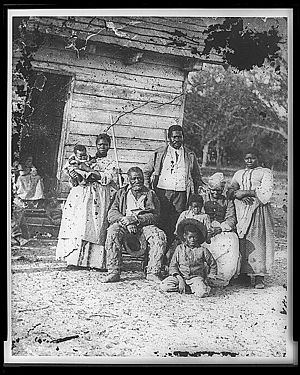 Four generations of slaves on a plantation in South Carolina c. 1862

Slavery in America began in the English colony of Jamestown in 1619. It started with the purchase of 20 Africans from an English warship named the White Lyon. The Colonists in the Virginia Colony bought the contracts of the Africans as indentured servants. Not long after this it became a custom to hold slaves for life in the colonies.

Those who defended slavery had a number of arguments to |justify it. They said it would destroy the economy of the South. Without slave labor they could not raise cotton, tobacco or rice. Freeing the slaves would cause widespread unemployment, it would lead to uprisings and complete chaos.

They used the French Revolution as an example. They pointed out slavery had existed all through history. It was in the Bible and even Abraham had slaves. Their legal argument was that blacks were not citizens but were property. 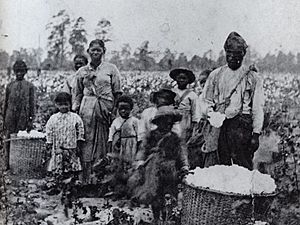 Family of black American slaves in a field in Georgia, circa 1850

Southern plantations could be extremely profitable. When you consider that only a small minority held slaves and that it was limited to the Southern United States, slaves were the real wealth.

The slave trade was banned in the United States after January 1, 1808. Slave ownership was still legal, but no more African slaves could be brought into the country. Until that time slave traders had become very wealthy by transporting slaves.

Examples of the enormous wealth of Southern slave owners includes Joshua John Ward of Georgetown County, South Carolina. He owned 1,130 slaves and controlled six large plantations. Another was Stephen Duncan. He was the wealthiest cotton planter before the Civil War. Over his lifetime he owned more than 2,000 slaves. He owned 15 plantations, the largest one used 858 slaves. 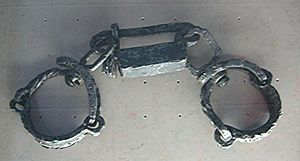 The Fugitive Slave Act of 1850 was a large political concession given to the South. It created a new commission that acted similar to the United States Marshals Service but with several differences. They were paid a reward by the federal government for each slave (or those who were claimed to be slaves) that was captured. They quickly became the largest federal employer at the time. The new act was anything but pro-States' rights as Northern state laws were ignored. There was no due process of law. In short, the Fugitive Slave act gave Southern states the power over the laws of Northern states by using the federal government to do their bidding.

Most Antebellum Period presidents were not only from the South, but also owned slaves themselves. Many figured prominently in maintaining the economics of slavery.

One reason for so many Southern presidents is that they benefited from the electoral college advantage they held, especially those from the largest slaveholding state, Virginia.

One of the key reasons Washington, D.C. was selected as the United States Capitol was that it located around a slave town, Alexandria, Virginia. New York City was in a free state and in Philadelphia a slave could only be kept for six months before being freed. This was inconvenient for slave owning politicians. Also, Washington D.C. was promoted by George Washington, Thomas Jefferson and James Madison—three key Southerners who owned slaves.

All content from Kiddle encyclopedia articles (including the article images and facts) can be freely used under Attribution-ShareAlike license, unless stated otherwise. Cite this article:
Slave Power Facts for Kids. Kiddle Encyclopedia.