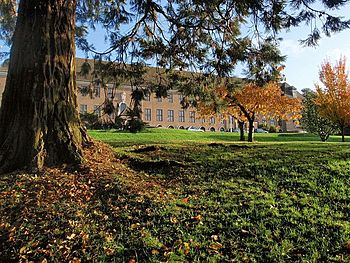 The Streatham Campus in Exeter, Devon is the largest campus of the University of Exeter. The centre of the campus is occupied by teaching, administrative and service buildings. Most of the university's student halls of residence, and some accommodation for postgraduates and families, are on its edges.

The campus has a student medical centre, supermarket, a counselling service, a children's day-care centre, a careers service and numerous catering outlets. Many halls of residence and some self-catering accommodation are located on this campus or in the near vicinity. In 2005 Streatham Campus's newest building, the Xfi centre, was completed to provide facilities mainly (but not exclusively) for postgraduate study in finance and investment.

The main bar on the campus, called "Ram", is situated in Devonshire house. The bar has an old feel to it with a beer garden outside. Cornwall House also has a bar, formerly called the "Ewe" which is part of the Lemon Grove (or "Lemmy" for short), the student nightclub. Both of these facilities are run by the Students' Guild. The postgraduate centre, Clydesdale House also has catering facilities and a bar. Clydesdale house also hosts social events organised by the Postgraduate Society.

The campus is not as noted for its architecture as it is for its landscaping, since many of its buildings date from the period of rapid UK university expansion in the 1960s and 1970s when cost considerations dominated. Architecturally the most interesting buildings are those that date from before or after this period, including Reed Hall (the 19th century Italianate mansion of the former owners of the Streatham Estate), and the Institute of Arab and Islamic Studies and Xfi (both from the 2000s). The University College's original architect, Vincent Harris, had a master plan for a ring of buildings rising from Washington Singer, but this was realised only in part; apart from Washington Singer, the only buildings he was responsible for are: Roborough (originally the University College's library), Hatherly (designed in the 1930s but not built until the 1950s), the Mary Harris Memorial Chapel, and Mardon Hall, the first student residence built on the campus. Sir Basil Spence was the architect of the Physics building.

Most of the teaching and administrative buildings on the Streatham campus are named after benefactors or former officers of the university. Major buildings, with their primary uses, include:

The Northcott Theatre is also located on the Streatham Campus, but is independent of the University.

The campus also has several galleries, including the Bill Douglas Cinema Museum. There is also a Sculpture Walk, including pieces by Henry Moore, Barbara Hepworth and a statue to commemorate the events at Tiananmen Square.

All content from Kiddle encyclopedia articles (including the article images and facts) can be freely used under Attribution-ShareAlike license, unless stated otherwise. Cite this article:
Streatham Campus Facts for Kids. Kiddle Encyclopedia.