The Rocks, Sydney facts for kids

Kids Encyclopedia Facts
Not to be confused with The Rock, New South Wales. 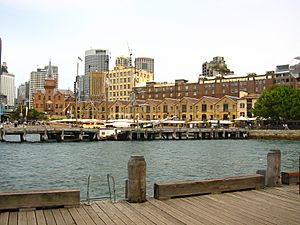 The Rocks is an urban locality, tourist precinct and historic area of Sydney's city centre, in the state of New South Wales, Australia. It is located on the southern shore of Sydney Harbour, immediately north-west of the Sydney central business district. The precinct and its immediate surroundings are administered independently of the local government area of the City of Sydney, by Property NSW.

The Rocks area borders on the Bradfield Highway, leading to the Sydney Harbour Bridge, with the localities of Dawes Point and Millers Point, to the west. It is immediately adjacent to Circular Quay on Sydney Cove, the site of Australia's first European settlement in 1788.

The Rocks became established shortly after the colony's formation in 1788. It was known as Tallawoladah by the Cadigal people. The original buildings were first traditional vernacular houses, of wattle and daub, with thatched roofs, and later of local sandstone, from which the area derives its name. From the earliest history of the settlement, the area had a reputation as a slum. After November 1790, many of the inhabitants were also aboriginals. In 1823, the district had a population of about 1,200. During the late nineteenth century, the area was dominated by a gang known as the Rocks Push. It maintained this rough reputation until approximately the 1870s.

By the early 20th century, many of the area's historic buildings were in serious decay. In 1900, bubonic plague broke out, and the state government resumed areas around The Rocks and Darling Harbour, with the intention of demolishing them and rebuilding them. More than 3,800 houses, buildings and wharves were inspected and hundreds demolished, but the continuation of these plans were brought to a halt due to the outbreak of World War I. During the 1920s, several hundred buildings were demolished during the construction of the Sydney Harbour Bridge. 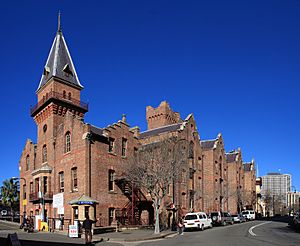 In 1968, the state government gave control of The Rocks to the Sydney Cove Redevelopment Authority, with the intention of demolishing all the original buildings, re-developing them as high-density residential dwellings. In February 1971, a group of local residents formed the Rocks Residents Group to oppose the plans. They felt that the new dwellings would result in increased rents, which would force out the traditional residents of the area. The residents' group requested a green ban from the Builder's Labourers Federation, who had become increasingly active in preventing controversial developments over the previous four years. 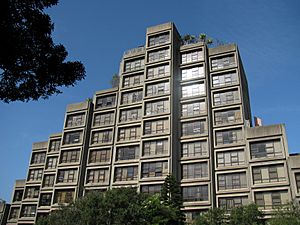 By 1973, the union had imposed the ban, and after discussions with the Sydney Cove Redevelopment Authority, a 'People's Plan' was developed. By October 1973, it appeared that the redevelopment would proceed as originally planned, using non-union labour. However, the green ban stayed in place until 1975, when the state union leadership was overthrown, and was ultimately successful, as can be seen in the buildings that survive today. Instead of demolishing The Rocks, renovations transformed the area into a commercial and tourist precinct.

Today the Rocks is a partly gentrified area, but still contains a significant proportion of Housing Commission properties, and there is still a significant problem of urban poverty and street crime in this district. As housing stock becomes dilapidated, government policy is to sell the now extremely valuable public housing units to private owners, in the expectation that they will restore the properties. The Sirius building and the associated "Save Our Sirius" protest group was formed to protest relocation of its residents. 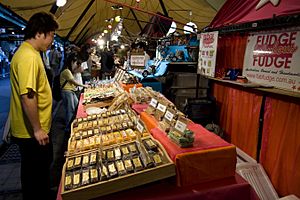 The close proximity to Circular Quay and the views of the iconic Harbour Bridge, as well as the historic nature of many of the buildings, makes the Rocks very popular with tourists. It features a variety of souvenir and craft shops, as well as many themed and historic pubs. The Rocks Market operates each weekend, with around 100 stalls. During the week, shopping options include galleries exhibiting Australian artists, such as Ken Done and Ken Duncan, as well as Australian clothing and Australian opal shops. There are numerous historic walks through the area, visiting historical buildings such as Cadmans Cottage and Sydney Observatory, and the Dawes Point Battery, which was the first fortified position in New South Wales.

Two separate pubs in The Rocks claim to be Sydney's oldest surviving pubs: the Fortune of War and the Lord Nelson. Others in the area include the Observer, the Orient, the Mercantile, the Palisade and the Hero of Waterloo.

A passenger boat terminal and the Museum of Contemporary Art, Sydney is also situated beside the Rocks area. The precinct can also be accessed by rail, as it is within walking distance of Circular Quay station.

All content from Kiddle encyclopedia articles (including the article images and facts) can be freely used under Attribution-ShareAlike license, unless stated otherwise. Cite this article:
The Rocks, Sydney Facts for Kids. Kiddle Encyclopedia.