Kids Encyclopedia Facts
Not to be confused with Towamensing Township, Carbon County, Pennsylvania.

Towamencin Township is a township in Montgomery County, Pennsylvania, United States. The population was 17,578 at the 2010 census. It is part of the North Penn School District and the North Penn Valley region that is centered around the borough of Lansdale. Towamencin has residential neighborhoods, historic farmhouses, recreational facilities, many schools, and open spaces. The community is a mix of residential, commercial and rural development. The Township is centrally located within Montgomery County with easy access to the Pennsylvania Turnpike’s Northeast Extension.

The first settlers, of German, Welsh, and Dutch descent, arrived in Towamencin Township around the turn of the 18th century. They mainly pursued agricultural endeavors to sustain their livelihood.

The first grant of land in Towamencin Township was in 1703 from William Penn's Commissioners to Benjamin Furley on June 8. The Commissioners granted 1,000 acres (4 km2) to him. On June 17 of that same year, Abraham Tennis and Jan Lucken bought the property from him, and then divided the land in half in 1709. The Edward Morgan Log House stands on land that was part of 600 acres (2.4 km2) granted to Griffith Jones by the Commissioners. Edward Morgan purchased 309 acres (1.25 km2) of this land, which included an existing "dwelling house", from Griffith Jones on February 26, 1708. In 1720, his daughter Sarah, who in 1734 would give birth to the famous frontiersman Daniel Boone, married Squire Boone. The land containing the house was then deeded to John Morgan, son of Edward, on August 23, 1723 as part of a 104-acre (.42 km2) tract. In March 1728 the settlers of the area petitioned William Penn's Commissioners for Towamencin to become a Township. The request was granted and a charter given. The land was surveyed and recorded, outlining the boundaries of the Township, known as antioch. Those boundaries are similar to what they are today. In the enumeration of 1734 there were 32 landholders within the Township, with William Tennis having the most area at 250 acres (1 km2).

The Indians of Towamencin

The American Indians who inhabited the area were the Lenni Lenape. They lived in Pennsylvania, as well as Delaware, New Jersey, and parts of Maryland. They were divided into three tribes: the Turtle, Turkeys, and Wolf, which were subdivided into clans, each clan having a name representing the character and situation of the tribe as a whole.

The Indians of Towamencin Township are of the Delaware Nation. They had a settlement in the southwest section of the Township along the Towamencin Creek. They established friendly relations with the settlers when they came to the Township. There are some accounts of violence attributed to the Indians, but they cannot be proven and are probably fictional. There are many accounts of Indians helping to tend the sick, and trading food and goods with the settlers.

It is not recorded when the tribes of Indians left Towamencin; it is suspected they left after the Revolutionary War.

The Maltese Cross of the Towamencin Volunteer Fire Company has an American Indian in the center.

Pennsylvania is known as the Keystone State for its role in the Revolution, and as one of the oldest settlements during the time, Towamencin Township played a part: the Township had encampments of soldiers, had many citizens that served, and was the retreating place for General Washington and his troops after the Battle of Germantown.

The Continental Army troops were in Towamencin from October 8, 1777 to October 16, 1777 and camped in the Northern section of the Township. The Township provided a secure area to rest, without fear of surprise attack by the British.

Washington commandeered Frederick Wampole's house to establish his quarters and conducted military duties from there. The house was located on Detwiler Road.

It was reported that Henry Cassel, whose land was used as an encampment by the Colonists, submitted to the Continental Congress an estimate of damages to his property by Washington's Army. The damage was to 696 fence rails used for firewood. The cost to replace those rails was 8.14 pounds. It is not known whether the newly formed government paid.

According to the United States Census Bureau, the township has a total area of 9.7 square miles (25.1 km2), all of it land. It is drained via the Skippack Creek into the Perkiomen Creek and Schuylkill River. Its villages include Inglewood, Kulpsville, and Oak Park (also in Hatfield Township.)

The Lansdale Interchange to Interstate 476 is with Sumneytown Pike (Route 63) in Kulpsville. Other roads of note include Allentown Road, Bustard Road/Forty Foot Road, Morris Road, Valley Forge Road (Route 363,) Wambold Road, and Welsh Road. 63 follows Forty Foot Road and Welsh Road east into Lansdale. The township boundaries consists entirely of straight sides at right angles and most of its boundaries consist of roads.

The Towamencin Township Board of Supervisors recognized the need for a Five-Year Strategic Plan during the 2007 budget process. In early 2007 the Board authorized the formation of a Strategic Planning Committee.

A committee of five residents, two supervisors, and the Township Manager was formed in late February, charged with developing a Five-Year Strategic Plan and a goal of completing it in time for the 2008 budget process. The committee expanded to six residents in mid-May.

The committee began weekly meetings in March 2007, starting with the task of developing a Community Vision and Mission Statement. They then received planning inputs from all Department Heads and the Township Manager. At the end of the input process, the committee developed Priorities, which were then voted on by each member of the committee for prioritization.

The committee then developed Goals, Sustainability Objectives and Implementation Tools and Techniques for each of the Priorities, segmenting them by areas of the Township Budget.

The name Towamencin is of Native American origin, and means "Poplar Tree". An alternate etymology is a legend associated started in the 1720s when Heinrich Fry purchased some land near what is now known as the Towamencin Creek. On this tract of land was a Native village whose chief spoke broken English. He observed one day two men clearing trees near the creek and said "Towha-men-seen", meaning "Two men seen." As the legend goes, the chief's pronunciation stuck, and is how Towamencin got its name. 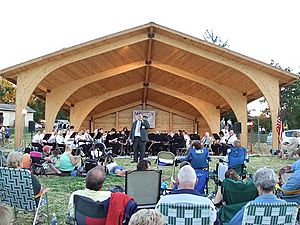 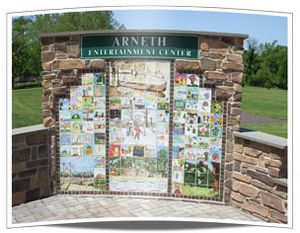 In 2006, the Board of Supervisors adopted an extensive Open Space Plan in accordance with the Montgomery County Green Fields/Green Towns Program that provides open space grants for acquisition, development and historic structure protection efforts. 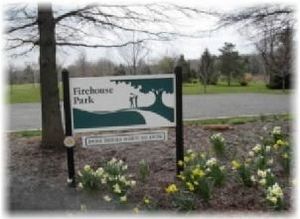 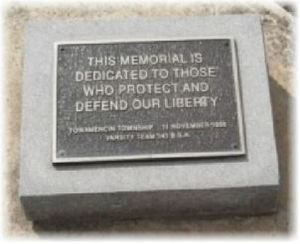 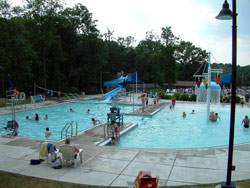 Recreation activities are planned and operated by the Parks and Recreation Department. Youth Sports Leagues are run by TYA.

In addition to its parks and pools, Towamencin Township is also home to Freddy Hill Farms and Family Fun Center where many come to enjoy ice cream, mini golf, driving range, and batting cages.

Towamencin along with Lower Salford Township share the home to Mainland Golf Course located in the North Western section of the township spanning the border of both. 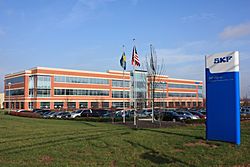 The North American headquarters of SKF is located in Towamencin. The company is one of the largest employers in the township.

From its founding through much of the 20th century, Towamencin was a rural community and accordingly its economy was built around agriculture. In addition to agricultural pursuits, in the late 18th century the township was home to two inns and four mills. By 1884, while the township remained primarily agricultural, it was also home to "two hotels, one store, [and] several carriage manufacturies" as well as local artisans. Another mill and adjoining general store was erected in 1894, which still stands today as a restaurant.

Today, Towamencin is a suburban community and its economy has shifted away from agriculture. The modern Towamencin is a commuter town. Only 6% of Towamencin's population both live and work within the boundaries of the township. The average commute time for residents of the township is 31 minutes, longer than the averages of both Montgomery County and Pennsylvania as a whole. The largest employer in Towamencin is the North Penn School District. Other major employers in the township are Greene Tweed & Company, Inc., and SKF USA, both in the manufacturing sector. According to the U.S. Census Bureau, 66.3% of the township's working age population were in the labor force between 2014 and 2018. This is slightly higher than the overall U.S. labor force participation rate for the same period, when it was approximately 62%. 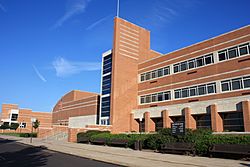 North Penn High School is located in the township and serves as the local public high school.

The township is a member of the North Penn School District. North Penn High School is located within the township, as are General Nash, Walton Farm, and Inglewood elementary schools. Private schools within Towamencin include Dock Mennonite Academy and Calvary Baptist School.

All content from Kiddle encyclopedia articles (including the article images and facts) can be freely used under Attribution-ShareAlike license, unless stated otherwise. Cite this article:
Towamencin Township, Montgomery County, Pennsylvania Facts for Kids. Kiddle Encyclopedia.