West Windsor Township was established by an act of the New Jersey Legislature on February 9, 1797, and incorporated on February 21, 1798, as one of the state's initial group of 104 townships. The Borough of Princeton (now part of Princeton) was formed from portions of the township on February 11, 1813. The township is closely associated with that now much more widely known town and several localities within West Windsor use Princeton in their name, the most notable of those being Princeton Junction. The USPS 'Princeton' post office (08540) facility is located within West Windsor, and covers parts of the township designated by Princeton, NJ mailing addresses.

A portion of Princeton University covering 400 acres (160 ha) south of Lake Carnegie is located in West Windsor Township. The University agreed in 2009 to make an annual payment in lieu of taxes of $50,000 that would be indexed to inflation to cover 81 acres (33 ha) of land in the township that the university had purchased in 2002.

In 2015, Forbes listed West Windsor as the 15th most affluent neighborhood in the U.S.

The first known European activity in the area now known as West Windsor Township dates to 1634, during the exploration of Captain Thomas Yong. Yong was an Englishman, who reportedly traded with the native Lenni Lenape population. The region was officially claimed for European settlement under the 1682 William Penn treaties, under which the Lenape conveyed vast portions of New Jersey & Pennsylvania to Quaker colonists. Through much of the 18th & 19th centuries, the area was known first as New Windsor Township, and later simply as Windsor Township, and its borders stretched to include all of present-day Princeton and East Windsor townships. In 1797, West Windsor was created and held only parts of Princeton within its boundaries. Following the 1838 formation of Mercer County, West Windsor's borders were again redefined in 1855 to reflect the township's current 26.84 square miles (69.5 km2). The town contained within it (entirely or partly) six small villages whose names & locations are still identifiable and/or in use in contemporary times. They are as follows:

After the construction of the train station in West Windsor, a seventh hamlet - Princeton Junction - was created.

Grover's Mill in West Windsor was the site Orson Welles chose for the Martian invasion in his infamous 1938 radio broadcast of The War of the Worlds.

During the later part of the 20th century the town underwent dramatic changes, driven mainly by a major boom in new housing developments. For generations, West Windsor had existed mostly as a sparsely populated agricultural community according to a 1999 article in The New York Times, the township "has grown into a sprawl of expensive houses in carefully groomed developments, and home to nearly 20,000 people", since the 1970s.

The West Windsor post office was found to be infected with anthrax during the anthrax attacks in 2001-2002.

In April 2002, a memorial was dedicated to the seven residents of West Windsor who lost their lives in the September 11 terrorist attacks. 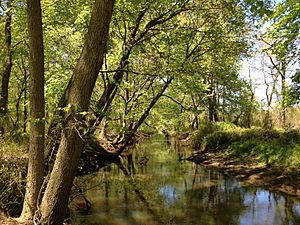 View west along the Assunpink Creek in West Windsor.

Princeton Junction (with a 2010 Census population of 2,465) is an unincorporated community and census-designated place located within West Windsor.

Other unincorporated communities, localities and place names located partially or completely within the township include Berrien City, Clarksville,

A 653-acre (264 ha) tract of land once owned by American Cyanamid and last used up until 2002 as an agricultural research facility by BASF has been dormant since 2002, and as of 2017 is listed for mixed-use development.

AOL/NeighborhoodScout named West Windsor in 2009 as the best neighborhood to raise children because of its school district (top 7% in New Jersey, top 3% nationwide), prevailing family type (families with school-aged children), and neighborhood safety (safer than 97% of neighborhoods).

There were 9,449 households out of which 45.5% had children under the age of 18 living with them, 73.0% were married couples living together, 5.6% had a female householder with no husband present, and 19.5% were non-families. 16.7% of all households were made up of individuals, and 6.1% had someone living alone who was 65 years of age or older. The average household size was 2.85 and the average family size was 3.23. 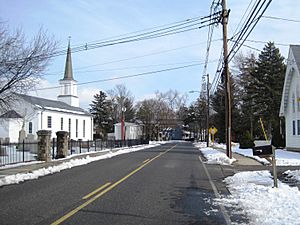 There were 7,282 households out of which 50.4% had children under the age of 18 living with them, 75.3% were married couples living together, 5.1% had a female householder with no husband present, and 17.8% were non-families. 14.6% of all households were made up of individuals and 2.8% had someone living alone who was 65 years of age or older. The average household size was 3.01 and the average family size was 3.36.

The West Windsor Arts Center is the junction where the arts and community meet. They offer performances, classes, workshops, exhibitions, literary arts events and various other special events. It is located in the historic Princeton Junction Firehouse.

The Mercer County Italian-American Festival is held annually in West Windsor and celebrated its 15th annual event in September 2014.

The West Windsor Community Park is a 123-acre (50 ha) public park which serves as the primary park for active recreation. Facilities include a playground, jogging/bicycling paths, basketball courts, dog parks, a skate park and tennis courts. The park is also home to the West Windsor Waterworks Family Aquatics Center.

Duck Pond Park is a 123-acre (50 ha) park under construction located off Meadow Road between the intersections with Clarksville Road and Bear Brook Road, bordering Duck Pond Run. It is designed to be a "second community park" for the township. As of 2015, lighted soccer fields have been completed and in use by the West Windsor - Plainsboro Soccer Association, as well as tennis, volleyball and basketball courts. Future plans include a playground, picnic areas, an amphitheater, and a fishing pond.

CR 533 (Quakerbridge Road) passes along the western border with Lawrence. CR 526 and CR 571 are multiplexed together from the northwestern part until they split in the center of the municipality. CR 535 passes through in the south and serves Mercer County College.

Princeton Junction station, a Northeast Corridor stop on Amtrak and NJ Transit, is located within West Windsor. Amtrak's Keystone Service and Northeast Regional routes stop at Princeton Junction which is ranked as one of the ten busiest train stations in the Northeast. The station had 6,800 average weekday boardings in 2012, the fourth-highest of any New Jersey Transit station in the state.

Running between the Princeton Junction station and the Princeton station is what is known to locals as the "Dinky." The Dinky is a one-car train that shuttles back and forth many times a day between the two stations. Traveling 2.7 miles (4.3 km) each way, it is the shortest and most expensive regularly scheduled passenger route in the United States.

All content from Kiddle encyclopedia articles (including the article images and facts) can be freely used under Attribution-ShareAlike license, unless stated otherwise. Cite this article:
West Windsor Township, New Jersey Facts for Kids. Kiddle Encyclopedia.