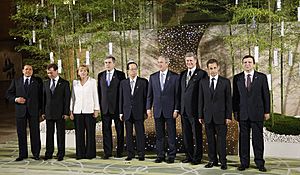 The 34th G8 summit was a meeting in 2008 for the leaders of Canada, the European Commission, France, Germany, Italy, Japan, Russia, the United Kingdom and the United States.

This meeting of the Group of Eight (G8) was the 34th meeting in a series which began in 1976. The G8 and the summit are part of a "consultative process and not an international organization".

The meeting took place in Japan at Tōyako (洞爺湖code: ja is deprecated , Tōya-ko) on the northern island of Hokkaidō. The international group of leaders met from July 7–9, 2008.

A small others were invited to join some of the discussions. 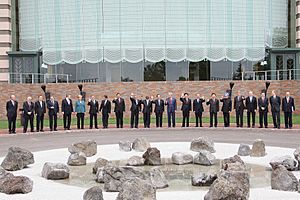 Family photo of the G8+G5

The G8 plus the five other nations were known as G8+5.

Leaders of some organizations were invited to be part of some of the discussions.

All content from Kiddle encyclopedia articles (including the article images and facts) can be freely used under Attribution-ShareAlike license, unless stated otherwise. Cite this article:
34th G8 summit Facts for Kids. Kiddle Encyclopedia.