Agriculture on the prehistoric Great Plains facts for kids 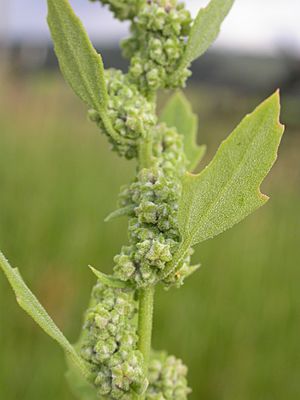 Agriculture on the prehistoric Great Plains describes the agriculture of the Native American peoples of the Great Plains of the United States and southern Canada in the Pre-Columbian era and before extensive contact with European explorers, which in most areas occurred by 1750. The principal crops grown by Indian farmers were maize (corn), beans, and squash, including pumpkins. Sunflowers, goosefoot, tobacco, gourds, and plums, were also grown. 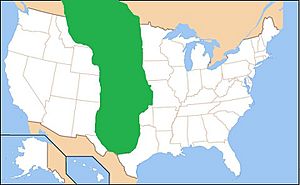 A map showing the location of the Great Plains

The primary constraint on agriculture on the Great Plains is that precipitation is often deficient for growing maize, the primary crop of Indian farmers. In addition, on the northern Great Plains the growing season is short. Agriculture on the Plains seems to have had an ebb and flow, advancing westward into the drier areas in favorable wet periods and retreating in drier periods. The periodic abundance or scarcity of bison was also a factor in human settlements on the plains. The animal was an important food resource for Plains people, as well as providing skins for clothing and shelters.

The Great Plains are often looked upon by anthropologists as a cultural backwater, derivative of societies in the eastern woodlands or the American Southwest. Contrary to that opinion, the Plains in the late prehistoric and proto-historic period (roughly AD 1400 to 1750) attracted migrants from both east and west. 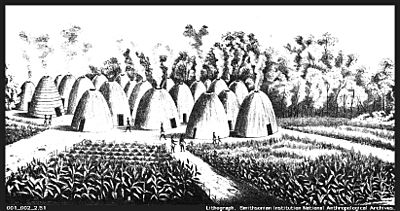 A Wichita village surrounded by fields of maize and other crops

Gathering wild plants, such as the prairie turnip (Psoralea esculenta) and chokecherry (Prunus virginiana) for food was undoubtedly a practice of Indian societies on the Great Plains since their earliest habitation 13,000 or more years ago. Over time Plains people learned to grow or facilitate the growth of native plants useful as food. Many native plants cultivated by Indians in the Eastern Agricultural Complex were also cultivated on the Great Plains.

Squash and beans were cultivated in what is now the United States, independent of Mesoamerica. Maize is a tropical crop first cultivated in Mexico which found its way northward to the United States over thousands of years. Maize agriculture began on the Great Plains by AD 900, initiating the Southern Plains villagers period of western Oklahoma and Texas. It probably came about as an extension westward and northward of the Caddoan cultures of eastern Texas. The Plains Village culture consisted of hamlets and semi-permanent villages along major rivers such as the Red, Washita, and Canadian. Subsistence was a combination of agriculture and hunting. A drying climatic trend beginning AD 1000 or 1100 may have tipped the subsistence scale more toward hunting and less toward a dependence upon agriculture. The Antelope Creek Phase of Plains villagers, dated from AD 1200 to 1450 in the Texas panhandle was influenced by the Southwestern Pueblo people of the Rio Grande valley in New Mexico. The contemporaneous Apishapa culture of southeastern Colorado depended mostly upon hunting. The historic descendants of the Southern Plains villagers are possibly the Wichita and Pawnee Indians.

The earliest known dates for maize agriculture on the northern Great Plains are from AD 1000 to 1200. The Missouri River Valley in present-day North Dakota was probably the northern limit of pre-historic maize cultivation on the Great Plains. Prior to cultivation, Indian farmers had to breed maize varieties that would mature in short growing seasons. Prehistoric evidence of maize cultivation north of the border of the United States and Canada on the Great Plains is lacking but by the 1790s maize was being grown by Indian farmers as far north as the mouth of the Red River north of Winnipeg, Manitoba.

The principal known Indian peoples who farmed extensively on the Great Plains when first discovered by European explorers were, from south to north, Caddoans in the Red River drainage, Wichita people along the Arkansas River, Pawnee in the Kansas River and Platte River drainages, and the Arikara, Mandan, and Hidatsa along the Missouri River in the Dakotas. Other peoples migrated or were pushed onto the Great Plains in late prehistoric or proto-historic times. Some of them, such as the Sioux and Cheyenne, gave up agriculture to become nomadic; other such as the Dhegiha (the Osage, Kaw, Omaha, and Ponca) and the Chiwere (Otoe, Iowa, and Missouria) continued to farm while also hunting buffalo for a major part of their livelihood.

Archaeologists have found evidence of agriculture practiced by Apache people (the Dismal River culture) living on the Great Plains in western Kansas and Nebraska in the 17th century. The semi-nomadic Apache were pushed southward and off the Great Plains by the fully nomadic Comanche in the 18th century.

Lacking iron tools and draft animals the prehistoric Indian farmer on the Great Plains primarily cleared and cultivated wooded land along rivers, especially the lighter soils on elevated river terraces which periodically flooded, renewing their fertility. They avoided cultivating the heavy soils of the open prairie with their deep mats of fibrous roots.

The high productivity of maize compared to European grains such as wheat enabled Indian farmers to produce large crops with a relatively low expenditure of effort, simple tools, and a small amount of cultivated land—although farming on the drought-prone Great Plains was always a risky endeavor. Whereas wheat and other grains in medieval Europe had average grain yields of two to ten seeds harvested for every one planted, maize yielded as high as "one hundred grains to one."

The average size of family plots of Indian farmers may have been about .6 acres (0.24 ha) with yields of 10-20 bushels (627 - 1,254 kg) of shelled maize per acre. This would have been sufficient, after accounting for post-harvest losses to pests and rotting and the retention of seed corn, to provide about 20 percent of the caloric needs of an Indian family of five persons. Some families may have cultivated up to 3.4 acres (1.4 ha) which would have produced sufficient maize for family consumption plus a tradeable surplus. Higher yields of up to 40 bushels (2,508 kg.) per acre have been reported on newly cleared land. Land declined in fertility in subsequent crop years.

Among the Hidatsa, typical of Great Plains farmers, fields were cleared by burning which also fertilized the soil. The three implements used by Indian farmers were the digging stick, hoe, and rake. The digging stick was a sharpened and fire-hardened stick, three or more feet long, that was used to loosen soil, uproot weeds, and make planting holes. The hoe was made from a buffalo or elk shoulder blade bone, or scapula, lashed to a wooden handle. The rake was made from wood or an antler. Some Indian women preferred the bone hoe even after the iron hoe was introduced by European traders and settlers.

Sunflowers were the earliest crop planted in spring. Sunflowers were planted in clumps around the edges of fields. Maize was next planted. Indian planting techniques are called Three Sisters agriculture. About five seeds were sown in a low mound of soil. The mounds were spaced about five feet apart. When the maize plants were a few inches high, climbing beans and squash seeds were planted between the mounds. The large squash leaves shaded the soil, preserving moisture and crowding out weeds. The beans fixed nitrogen in the soil and climbed up the corn stalks as support. The Wichita, and possibly other southern peoples, planted or tended thickets of low-growing Chickasaw Plum trees separating and bordering their maize fields. Tobacco was planted in separate fields and tended by old men. Women did most of the other farming, although men assisted in clearing land.

Indian farmers avoided fertilizing their fields with manure. As the soil declined in fertility with each crop year, unproductive fields were fallowed for two years and then replanted.

One of the rituals of the Pawnees during the spring planting season to ensure the fertility of the soil was the Morning Star ceremony and the ritual sacrifice of a young girl captured from an enemy tribe. The Morning Star sacrifice did not take place every year. The last human sacrifice by the Pawnee was in 1838.

Common to many other Plains farmers, the Pawnee left their villages in late June when their corn crop was about knee high to live in tipis and roam the plains on a summer buffalo hunt. They returned about the first of September to harvest their crops. Maize, beans, and pumpkins were dried, packed into rawhide bags, and stored in bell-shaped underground storage pits. The Pawnee followed the harvest with a month of celebrations and in early December departed their villages again for a winter hunt, their stored agricultural products hidden beneath the ground. This yearly cycle of life was common among the Plains farmers, especially after the acquisition of the horse in the late 17th and 18th century gave then the mobility to undertake lengthy hunts far from their permanent villages.

Trade between the farming and the nomadic hunting Indians was important on the Great Plains. The Mandan and Hidatsa villages on the Missouri River in the Dakotas conducted a large trade with the non-agricultural hunting Indians. In fall 1737, the French explorer La Vérendrye found a group of Assiniboine planning to undertake their annual two-month-long, thousand-mile round trip south to the Mandan villages to trade bison meat for agricultural goods. The trading expedition was conducted on foot with dogs as draft animals as neither the Assiniboine nor the Mandans yet possessed horses. There is abundant evidence of similar long-distance trading between farmers and hunters among other tribes of the Plains.

All content from Kiddle encyclopedia articles (including the article images and facts) can be freely used under Attribution-ShareAlike license, unless stated otherwise. Cite this article:
Agriculture on the prehistoric Great Plains Facts for Kids. Kiddle Encyclopedia.