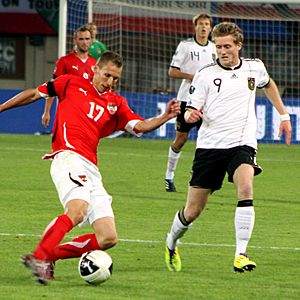 André Schürrle (born in Ludwigshafen, Germany on 6 November 1990) is a German association football forward that plays for Chelsea and the Germany national football team. He was part of Germany's 2014 FIFA World Cup squad. He began his career at 1. FSV Mainz 05, then went to Bayer 04 Leverkusen. His performances at that club got Chelsea interested in him, and in 2013 he was sold to Chelsea for £18 million.

All content from Kiddle encyclopedia articles (including the article images and facts) can be freely used under Attribution-ShareAlike license, unless stated otherwise. Cite this article:
André Schürrle Facts for Kids. Kiddle Encyclopedia.