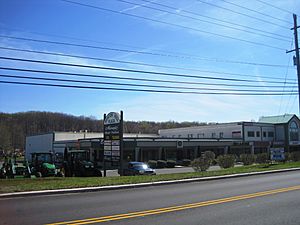 Beacon Hill is an unincorporated community located within Marlboro Township in Monmouth County, New Jersey, United States. The community is named for a nearby hill, in-turn named because it was a lookout point towards the Raritan Bay and beacons on the hill were used to warn residents of impending British troops in the American Revolutionary War. Located on the north face of the hill are housing developments and Marlboro Memorial Middle School. East of the summit, New Jersey Route 34 runs through the area through a commercial zone.

All content from Kiddle encyclopedia articles (including the article images and facts) can be freely used under Attribution-ShareAlike license, unless stated otherwise. Cite this article:
Beacon Hill, New Jersey Facts for Kids. Kiddle Encyclopedia.