Bluey is an Australian animated television series for preschool children that premiered on ABC Kids on 1 October 2018. The program was created by Joe Brumm with Queensland production group Ludo Studio. It was co-commissioned by the Australian Broadcasting Corporation and the British Broadcasting Corporation, with BBC Studios holding global distribution and merchandising rights. The series made its premiere on Disney Junior in the United States and was released internationally on Disney+.

The show follows Bluey, an anthropomorphic six-year-old Blue Heeler puppy who is characterised by her abundance of energy, imagination and curiosity of the world. The young dog lives with her father, Bandit; mother, Chilli; and younger sister, Bingo, who regularly joins Bluey on adventures as the pair embark on imaginative play together. Other characters featured each represent a different dog breed. Overarching themes include the focus on family, growing up and Australian culture. The program was created and produced in Queensland; its capital city inspires the show's setting.

Bluey has received consistently high viewership in Australia on both broadcast television and video on demand services. It has influenced the development of merchandise and a stage show featuring its characters. The program won a Logie Award for Most Outstanding Children's Program in 2019 as well as an International Emmy Kids Award. It has been praised by television critics for depicting a modern everyday family life, constructive parenting messages and the role of Bandit as a positive father figure. Minor shortcomings in regards to inclusive language have been criticised. Bluey was renewed for a third series in October 2020.

The child characters of Bluey are voiced by children of the program's production crew and are not credited as voice performers.

A central theme of the series is the influence of a supportive family; this is reflected in the relationships between Bluey, Bingo, Bandit and Chilli. The Heeler family are presented as a nuclear family. Brumm was eager to reflect contemporary parenting practices, with both adults shown to be working parents; Bandit as an archaeologist and Chilli working part-time in airport security. Bethany Hiatt of The West Australian explains that the series depicts the realities of modern-day fatherhood, with Bandit seen regularly doing housework and engaging in imaginative play with his children. Chilli's role as a mother is explored as she balances both work and family life. Both parents are shown to acknowledge and validate the emotions of their children, such as Bluey's distress after the death of a bird. Bluey and Bingo are shown to navigate their sibling relationship throughout the episodes, learning how to work together, compromise, and resolve conflicts. Episodes detail the family's contemporary domestic lifestyle, with Philippa Chandler of The Guardian describing the series as "social realism". 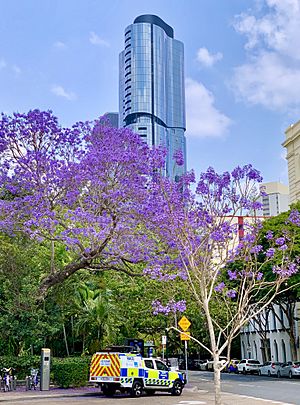 Jacaranda trees are featured in the series as an example of flora in Australia.

The series also explores Australian culture, and is set in subtropical Queensland. The animation of Australian architecture in the series is designed to reflect the typical residential designs of Brisbane; high-set suburban dwellings with characteristic verandas, against representations of Brisbane skylines. The characters speak with Australian accents in local and international airings. The series has a focus on the Australian sense of humour with dry wit frequently expressed through the dialogue. Several episodes detail the exploration of Australia's climate and nature. The characters encounter Australian wildlife such as fruit bats, wallabies, kookaburras and ibises. Flora of Australia are also depicted in the series, including Poinciana trees and Jacaranda trees. Brumm expressed that he didn't want to exaggerate the stereotypes of Australia.

The series advocates the importance of play throughout childhood. Bluey and Bingo are the vehicle used to display this theme; the episode "Trampoline" features Bandit imploring Bluey to continue creating new games to play. The siblings engage in imaginative play during "mundane" activities such as visiting the doctor or going to the supermarket. The parents are shown to engage in the play with their children. Bluey and Bingo also engage in imaginative play with their friends; learning lessons such as the importance of following the rules. The characters also learn lessons such as the influence of technology, the economy and personal finance through their gameplay. Pearson has stated that the characters experience emotions such as jealousy and regret through their gameplay. He commented that, while there is no antagonist in the series, these emotions form the central conflicts of the program.

The first series premiered in Australia on ABC Kids on 1 October 2018, with 26 episodes airing daily throughout October. The following 25 episodes of the series began airing on 1 April 2019. The final episode of the first series, a Christmas special, aired on 12 December 2019. It was reported in March 2019 that production had begun on a second series of 52 episodes; the order was officially announced in May. The second series premiered on 17 March 2020, with the first 26 episodes airing daily, through April. The remaining episodes began airing on 25 October 2020, and included a Christmas special, which aired on 1 December 2020. Preliminary discussions for the third series had begun by April 2020; the series order was made official in October.

In June 2019, the international broadcasting rights to Bluey were acquired by The Walt Disney Company, with plans to premiere on the Disney Junior television network and be distributed on the Disney+ streaming service in all territories (excluding Australia, New Zealand and China) from late 2019. The series premiered on Disney Junior in the United States on 9 September 2019 and was later distributed on Disney+ on 22 January 2020 and in the United Kingdom on 1 October 2020. The series notably features the original voice actors while airing overseas, after producers were initially asked to replace the Australian accents of the characters. The second series debuted on Disney Channel in the United States on 10 July 2020. In October 2019, Bluey debuted in New Zealand, airing on TVNZ 2 and streaming on TVNZ OnDemand. The first series made its Australian pay-TV premiere on CBeebies on 4 May 2020.

Bluey has received consistently high viewership on ABC Kids in Australia, becoming the most watched children's program across all channels on broadcast television in 2018 and 2019. The highest-rating live broadcast of the program, an episode of the second series, "Baby Race", premiered on 17 November 2020 to 459,000 viewers. It was the most-watched broadcast across all free-to-air multichannels, and the eleventh most-watched broadcast overall. In 2019, the series was the most-watched program through time shifting.

In March 2019, it was reported that Bluey had become the most downloaded program in the history of ABC's video on demand and catch up TV service ABC iview, with 21.3 million total episode plays. Within one year of the show's premiere, this figure had risen to 152 million, and by May 2020, there had been 261 million plays of episodes from the first series. It was also reported that the second series had totalled 43 million episode plays by May. Each episode of the second series had averaged 2.7 million plays by September.

In April 2019, BBC Studios entered a partnership with Penguin Random House Australia with a deal to publish three Bluey books before the end of 2019. "The Beach", "Fruit Bat", and a sticker activity book entitled "Time to Play", were released on 5 November 2019. All three books were recognised as the highest-selling releases in the weekly Australian book charts of November 2019, and had sold a combined total of 350,000 copies by January 2020. The combined sales of the first nine books reached 1 million in June 2020. In September 2020, the partnership with Penguin Random House was expanded to include global distribution rights, allowing the books to be released in the United States and the United Kingdom.

Moose Toys was named as the global toy partner for Bluey in June 2019; the company announced that toys would be released in Australia by the end of 2019, and later in the United States. Plush character toys of Bluey and Bingo were released in November, and a character figurine set was released in December. The plush Bluey topped the Toys "R" Us release chart of Christmas 2019, while the demand for the plush Bingo exceeded the number of toys being supplied to stores. By December, over 100,000 plush character toys had been sold in Australia. The toy line was launched in the United States in June 2020.

In January 2020, Bluey partnered with Bonds to release a clothing range for children, including pyjamas and socks featuring character designs. A more comprehensive clothing range was made available at Australian retailers in March, including clothing, sleepwear and underwear. A range of adult pyjamas were released in May 2020 through Peter Alexander stores, which became the fastest selling collection in the retailer's history. Commemorative birth certificates featuring Bluey artwork were made available to Queensland residents from March. Bauer Media Group released the first issue of a monthly Bluey magazine in May. A lifestyle range of children's furniture was released in June.

It was revealed that a stage show based on Bluey was being developed in November 2019. The live stage show, titled Bluey's Big Play, will tour in fifty theatres around Australia and will feature the characters from the series. The tour was initially scheduled to begin in May 2020, but was delayed due to restrictions relating to the COVID-19 pandemic. After eased restrictions, two preview performances were held at the Canberra Theatre Centre in January 2021 before further shows across the country.

All content from Kiddle encyclopedia articles (including the article images and facts) can be freely used under Attribution-ShareAlike license, unless stated otherwise. Cite this article:
Bluey (2018 TV series) Facts for Kids. Kiddle Encyclopedia.