Chatham County ( CHAT-əm) is located in the U.S. state of Georgia, on the state's Atlantic coast. The county seat and largest city is Savannah. One of the original counties of Georgia, Chatham County was created February 5, 1777, and is named after William Pitt, 1st Earl of Chatham.

The U.S. Census Bureau's official 2020 population for Chatham County was 295,291 residents. This was an increase of 11.4% from the official 2010 population of 265,128 residents. Chatham is the sixth most populous county in Georgia, and the most populous Georgia county outside the Atlanta metropolitan area. Chatham is the core county of the Savannah metropolitan area.

Chatham County is the northernmost of Georgia's coastal counties on the Atlantic Ocean. It is bounded on the northeast by the Savannah River, and in the southwest bounded by the Ogeechee River. 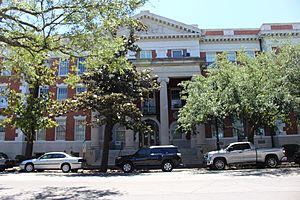 All content from Kiddle encyclopedia articles (including the article images and facts) can be freely used under Attribution-ShareAlike license, unless stated otherwise. Cite this article:
Chatham County, Georgia Facts for Kids. Kiddle Encyclopedia.