Cuisine of São Tomé and Príncipe facts for kids 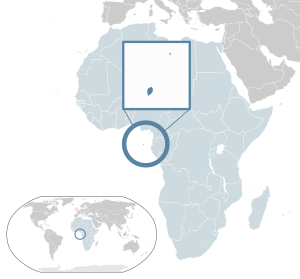 Location of São Tomé and Príncipe 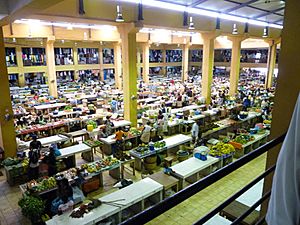 A marketplace in São Tomé, the country's capital, serves as a venue for local fishermen and farmers 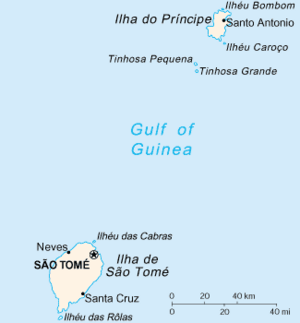 A close-up map of São Tomé and Príncipe

Santomean cuisine comprises the cuisine, dishes and foods of São Tomé and Príncipe, a Portuguese-speaking island nation in the Gulf of Guinea, off the western equatorial coast of Central Africa. The country consists of two archipelagos around the two main islands: São Tomé and Príncipe, located about 140 kilometres (87 mi) apart and about 250 and 225 kilometres (155 and 140 mi), respectively, off the northwestern coast of Gabon.

The nation's cuisine has been influenced and shaped by African and Portuguese settlers.

Staple foods include fish, seafood, beans, maize and cooked banana. Tropical fruits such as pineapple, avocado and bananas are a significant component of the cuisine. The use of hot spices is prominent in São Tomése cuisine. Coffee is utilized in various dishes as a spice or seasoning. Breakfast dishes are often reheated leftovers from the previous evening's meal. 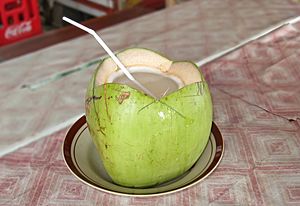 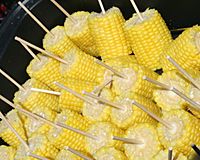 Street foods include stews, safú (a fruit) and corn on the cob.

Estufa de morcego is a bat stew delicacy that is served on saints days and during fiestas.

All content from Kiddle encyclopedia articles (including the article images and facts) can be freely used under Attribution-ShareAlike license, unless stated otherwise. Cite this article:
Cuisine of São Tomé and Príncipe Facts for Kids. Kiddle Encyclopedia.