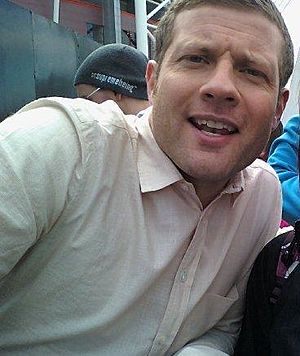 O'Leary was born in Colchester, Essex to Irish parents. He has dual citizenship British and Irish.

He started presenting Big Brother's Little Brother in 2001. He presented the show until 2008 when Big Brother ended. He has presented The X Factor since 2007.

In 2014 O'Leary will present This Morning for one week.

All content from Kiddle encyclopedia articles (including the article images and facts) can be freely used under Attribution-ShareAlike license, unless stated otherwise. Cite this article:
Dermot O'Leary Facts for Kids. Kiddle Encyclopedia.